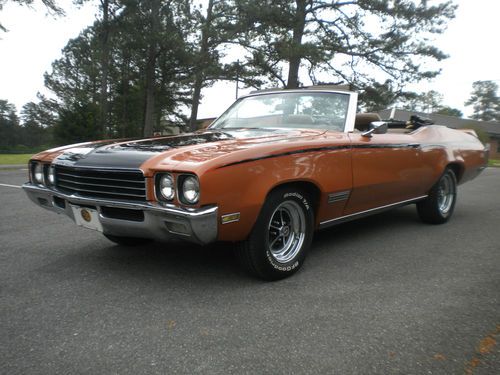 1971 BUICK SKYLARK CONVERTIBLE - PAINTED TO LOOK LIKE GSX- RESTOMOD - 6.0 SS ENGINE- 4 SPEED OVERDRIVE TRANSMISSION- KILLER STEREO SYSTEM W/CD- THIS CAR WAS RESTORED 2006-2007- IT HAS BEEN A FUN DRIVER SINCE- RUNS AND DRIVES GOOD- IT IS NOT A SHOW CAR, BUT IT IS A NICE DRIVER THAT DRAWS ATTENTION WHEREVER IT GOES- IT IS MY FRIEND'S CAR THAT HE HAS ENJOYED OVER THE LAST SIX YEARS- ORIGINAL A/C CAR, BUT NO A/C WAS INSTALLED WHEN RESTORED- AUTO METER GUAGES IN DASH- INOPERABLE FEATURES I NOTICED ARE SPEEDOMETER AND HORN- CALL JOHNNY FOR MORE INFO ON THIS COOL CAR AT 706-506-8497 HE KNOWS ALL THE INFO. ON THE RESTOMOD DRIVETRAIN- BITTERSWEET PAINT LOOKS GOOD- TOP IS GOOD AND GOES UP AND DOWN LIKE IT SHOULD- TRUNK IS LINED WITH A TYPE OF GRAY CARPET- THERE IS NO CONVERTIBLE BOOT- ENGINE COMPARTMENT LOOKS ORIGINAL EXCEPT RESTOMOD PARTS- BID WHAT YOU THINK IT'S WORTH- MY FRIEND NEEDS TO SELL HIS TOY FOR FAMILY OBLIGATIONS