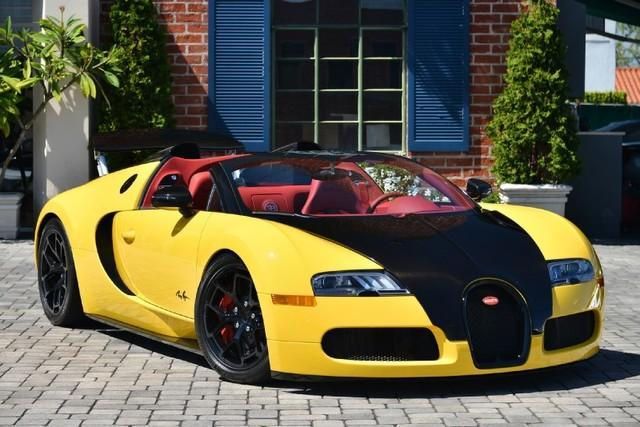 All six Bugatti Veyron Legend Editions gather at the Quail

Walk through the entrance to the Quail, make a right, and you'll be greeted by $18 million worth of car. Sure, that's not an unusual sight during Monterey Car Week, where classics are being auctioned off for well beyond that, but we're talking about $18 million of brand new car. We're talking about all six of the Bugatti Veyron Legend Editions.
One year after the first Legend Veyron made its debut in Monterey, Bugatti has completed the limited-run series of six. All of these cars are unique creations that celebrate the automaker's history - the sextet includes the Jean-Pierre Wimille, Jean Bugatti, Meo Costantini, Rembrandt Bugatti, Black Bess and Ettore Bugatti editions. Only three examples of each special edition will be made, all priced at 2.35 million euro ($3.14 million, based on today's rates).
It's super rare to see multiple Veyrons in one place at one time, and this might be the only time in history where all six Legends cars are displayed together at once. Have a look at all of 'em for yourself in the gallery above.

Just 50 to go as Bugatti sells its 400th Veyron

When Bugatti first introduced the Veyron, production was limited to just 300 coupes (including the original 16.4 and the Super Sport). Those were followed by an additional 150 roadsters (both Grand Sport and Vitesse), of which 100 have now been sold, leaving just 50 examples left before the Veyron finally roars off into the sunset.
The 400th Veyron built was the third and final example of the Jean-Pierre Wimille edition pictured here. Based on the Vitesse roadster, the Wimille edition is the first in a series of six Legend specials that pay homage to the Alsatian marque's history. The second is dedicated to Jean Bugatti, and the third to racer and factory team manager Meo Costantini, with three more of these three-unit special editions to follow out of the remaining 50 cars to be built at Molsheim. We're expecting one of the remaining three to be named after Rembrandt Bugatti, designer of the company's elephant hood ornament.
Given that it has taken the company over eight years to build those 400 cars, it figures to take Bugatti another year or so to complete the final 50, by which point it'll hopefully have a successor in place. For more news on the landmark, see the official press release below.

What's up with this Bugatti Veyron spied at the N?rburgring?

It's been sixteen years since Volkswagen acquired the Bugatti name and started showing off successive concept cars to preview the Veyron that followed. It's been eleven years since the first Veyron prototype started testing, and nine years since it entered production. But soon - probably sometime next year - Bugatti will have sold the last of the Veyrons it will ever build. And considering that the Veyron is the only model it offers, it will need something else to take its place, lest the marque effectively go dormant once again.
Having ruled out the prospect of doing a less expensive sports car years ago and, more recently, the production prospects for the Galibier super-sedan, Bugatti is committed to further the concept of a super-sports car that will, in all likelihood, be lighter than the current Veyron - which may seem like a no-brainer, considering the car weighs over 4,000 pounds - but with an engine that is, by every metric but output, twice the size of the one you'd find in, say, a modern McLaren, trimming weight will be no mean feat.
That does appear, however, to be what Bugatti is seen testing at the Nürburgring in this video clip below. Going by the handle fastsportscardriver, the videographer/uploader doesn't seem to know what he has captured here, but the Grand Sport prototype he's spotted seems to be wearing some sort of metal frame over the exposed engine, suggesting something's at work here. Just what that is, we don't know. But when you're dealing with an engine that already produces upwards of a thousand horsepower, whatever they're working on, it's got to be good.