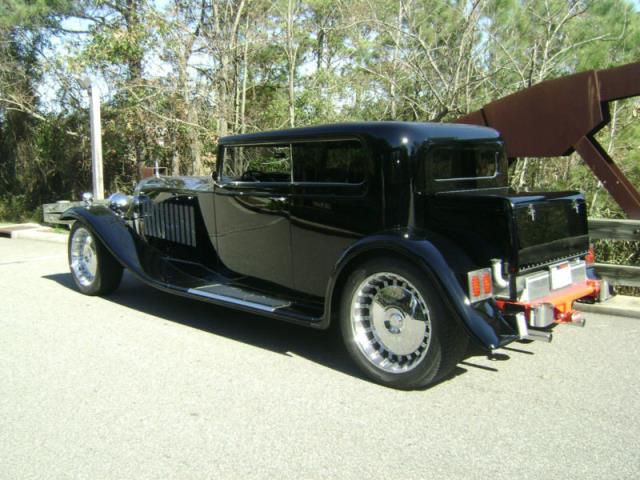 1931 Bugatti Royale Kellner Coupe Tribute. Hand Crafted Carbon Fiber Recreation Of The Worlds Most Prestigious Automobile. One Of Only One Produced. Every Piece Of This Project Was Hand Crafted. Body And Fenders Were Formed Of Carbon Fiber With The Body Having A Foam Core To Add Strength. Hood And Grill Are Hand Formed Steel.

After taking last week to review the record category for World's Fastest Production Car, Guinness World Records has reconfirmed that the holder of this hotly contested superlative remains the Bugatti Veyron Super Sport.
The Veyron Super Sport set the official record back in 2010 with a Guinness-verified speed of 267.8 miles per hour, but other interested parties have recently contested that record's validity because the Veyron used that day had its speed limiter removed. With the speed limiter in place, the Veyron Super Sport tops out at 258 mph.
Guinness rules state that a record-setting production car must be unchanged from what is available to customers. While some, particularly Hennessey Performance, have claimed that removing the Veyron's speed limiter violated that rule, Guinness has settled the matter by stating that "a change to the speed limiter does not alter the fundamental design of the car or its engine."

Bugatti has come back from losing its "World's Fastest Production Car" title with a new superlative to add to the Veyron's trophy case: World's Fastest Open-Top Production Car. That's right, if you can't beat 'em, take the roof off and join them.
The record of 408.84 kilometers per hour, or 254.04 miles per hour, was set by a Bugatti Veyron Grand Sport Vitesse driven by Chinese racing driver Anthony Liu at Volkswagen Group's proving grounds in Ehra-Lessian, Germany. The speed was measured and verified by the German Technical Inspection and Certification Association, or TÜV.
That last point is important to note, as the kerfuffle over the closed-roof Veyron's record involved the Guinness World Records organization, which both sanctioned the car's world record run back in 2010 and then stripped Bugatti of the title after it was learned the car used to set the record had its speed-limited removed. Also, whereas Guinness calculates a car's speed based on the average of two runs in opposite directions, Bugatti doesn't say what criteria TÜV used to verify and calculate the convertible's speed.

Bugatti mules could signal Veyron successor in the works

The chances of a new product from Bugatti are getting closer. The tally of available Veyrons left keeps dropping, with only around 40 units to go to complete the stated 450-car production run. The supercar maker has reportedly begun development on a successor, and that is looking increasingly likely because a pair of test cars with some intriguing modifications have been spotted lapping the Nürburgring.
We recently saw the white car testing in a short video; now a new set of spy shots have given us an even better look. The car appears stock, until you notice the weird aluminum armature at the back. The wires and boxes indicate it's likely for data acquisition, and given the location, engine testing would be a good bet.
The black Veyron is wearing slightly widened bodywork and may also have a wider track. According to our spy shooters, those absolutely massive black wheels may be made from carbon fiber. Another interesting note is the panel cut out at the rear of the car behind the driver's side tire. There is clearly a radiator visible behind it. Perhaps, both cars are testing new powertrain options?