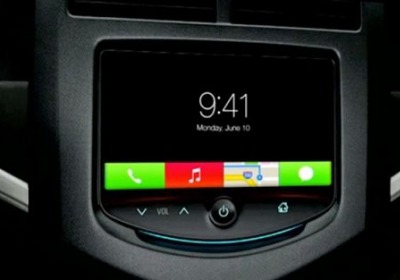 While watching Apple introduce iOS in the Car during its WWDC keynote on Monday, we wondered how automakers, even the 14 who've already signed up to integrate this new in-car functionality of iOS 7, will feel about having the Cupertino company's mobile operating system supplant their own in-car systems. After all, some OEMs like Ford, General Motors and many luxury automakers have sunk millions of dollars into developing their own advanced infotainment, navigation and communication platforms like MyFord Touch, CUE and older systems like iDrive.

One automaker has now spoken up. A BMW spokeperson was interviewed by someone in the news department of British auto dealer group Arnold Clark and confirmed that the company would not be getting in line to integrate iOS in the Car anytime soon. The reason, as we suspected, is that BMW believes its own products developed over the last decade are both plenty good and already so deeply integrated with other systems of the car that, as told to Arnold Clark, "it would not be that straightforward to start changing all of the architecture of a car as has been implied [by Apple]."

While BMW isn't interested in spending more money to integrate Apple's services and functionality over its own, it has spent a good bit already to integrate iPhone functionality in its cars, including the relatively rare ability to support iPod Out and display Apple's own interface on Mini models with the optional Mini Connected feature, as well as committing to integrate Siri 'Eyes Free' functionality.

The BMW spokesperson also told Arnold Clark that the company would be surprised if such a system as Apple's became ubiquitous in the industry considering how much time and money automakers invest in their own media, navigation and communication solutions, but that such a system could become popular with those manufacturers who haven't made those same investments. While certainly possible, iOS in the Car, according to what we know at this point, will still rely on there being a 3G/4G-equipped iOS device present and connected to the car's system. Unless automakers want to give out free iPhones, or Apple begins licensing the user interface to automakers directly for use without an iOS device, iOS in the Car won't be an automaker's sole offering in this regard anytime soon.