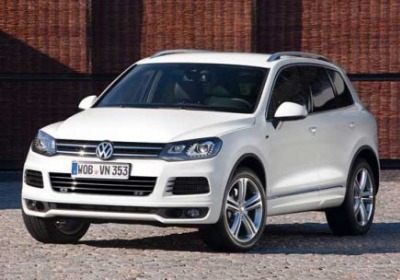 Volkswagen introduced its aggressive R-Line appearance package on the CC and Beetle last year, but later this year, this treatment will also be applied to VW's crossovers, the Tiguan and Touareg. Both sporty-looking utility vehicles will be unveiled next week at the Detroit Auto Show.

The 2014 Tiguan R-Line comes standard with bi-xenon headlights and LED daytime running lights, and the package adds 19-inch wheels, grey fender extensions, body-color side skirts and a liftgate spoiler. Inside, the R-Line adds a flat-bottom sport steering wheel with paddle shifters, a black headliner and numerous metallic trim accents such as the stainless scuff plates, the aluminum pedals and metallic finish on the instrument and door panels. The Tiguan R-Line will be offered in front- and all-wheel drive configurations.

As for the 2014 Touareg R-Line (shown above), this model gets an ever more distinctive look with an aggressive front fascia, 20-inch wheels and dual oval-shaped exhaust outlets in addition to the painted side skirts and LED taillights. Similar metallic interior trim pieces found inside the Tiguan R-Line will also make their way into the Touareg as well as gloss black accents on the instrument panel and center stack.

VW says that both new R-Line models will get R-Line badges and a sport-tuned suspension. Pricing won't be announced until closer to the launch of both models sometime this fall, but you can still check out the more info on both in the press release posted below.

01.11.2013
VOLKSWAGEN INTRODUCES PERFORMANCE INSPIRED R-LINE® TRIM ON TOUAREG AND TIGUAN SUVS Herndon, VA - Volkswagen of America, Inc. announced today it will offer the R-Line derivative on two additional models for the U.S. market. Joining the CC R-Line and recently introduced Beetle R-Line coupe, the Tiguan R-Line and Touareg R-Line will be added to the Volkswagen line-up for model year 2014. Both models will be introduced at the 2013 North American International Auto Show.

The Touareg R-Line and Tiguan R-Line models feature an aggressive appearance package and interior enhancements that provide an all-around dynamic and sporting appearance. Volkswagen R GmbH has developed the R-Line for drivers who want the sporty and aggressive styling of the Volkswagen R models, but without the additional engine performance.

Along with the interior treatments, the Tiguan R-Line becomes the fourth Volkswagen model to offer the award-winning Fender Premium Audio System. The system features a 10-channel, 400 watt amplifier with eight speakers and a rear subwoofer.

Touareg R-Line
The Touareg R-Line adds a host of dynamic and sporty elements to the long list of standard equipment on the Touareg Lux trim. Naturally, all Touareg models come standard with 4Motion all-wheel drive mated to an eight-speed automatic transmission and the R-Line adds a sport-tuned suspension to either the 3.0-liter VR6 gasoline or 3.0-liter TDI Clean Diesel engine.

Inside, the R-Line theme continues with unique high-gloss black and brushed aluminum trim on the dashboard, center console and doors. Stainless-steel R-Line scuff plates, aluminum sport pedals, and an R-Line steering wheel round out the model's interior enhancements.

Both models are slated to go on sale in the third quarter of 2013. Pricing will be announced closer to launch.