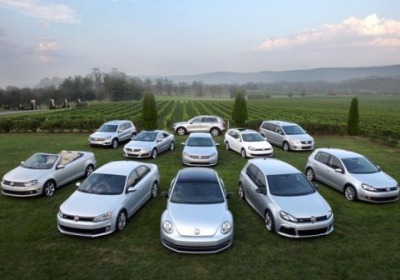 J.D. Power has just revealed the results of its 2013 APEAL Study, which looks at which brands have the most appealing cars based on sales figures, dealer inventory, brand loyalty, transaction and trade-in prices. The study was revamped for 2013, and places a larger focus on the new tech and infotainment options available to customers. All told, study participants gauged their vehicles on 77 different attributes, delivering a score out of a 1,000 points.

The Volkswagen Group had the greatest success of any corporation, topping the APEAL rankings with the Audi Allroad, Porsche Boxster, Porsche Cayenne, VW GTI and Passat. Chevrolet had the highest number of awards for a single brand, though, with the Avalanche, Sonic and Volt all taking home a prize.

The best brand overall was Porsche, which scored 884 out of a possible 1,000 points. The top Japanese brand was Lexus with a score of 847, while the top American brand was Cadillac, at 841. The best mainstream brand was Ram, which received a very respectable 817. The industry average for this year's study was 795, with 16 brands, all of which were mainstream, falling below the average.

There were a few surprises for the individual model awards, as well. The Buick Encore took the sub-compact CUV class, while the Ford Mustang was the winner of the mid-size sporty car segment. The Lincoln MKZ beat out the BMW 3 Series, Cadillac ATS, and a spate of others to capture the compact premium car segment. Finally, the redesigned Land Rover Range Rover was the first vehicle outside of the large premium car segment to net the highest overall score. For more details, scroll down to read the official press release.

WESTLAKE VILLAGE, Calif.: 24 July 2013 -- The most appealing vehicles tend to remain on dealer lots for shorter periods, command higher transaction prices, and are more likely to create owner loyalty when they are ultimately traded-in, according to the J.D. Power 2013 U.S. Automotive Performance, Execution and Layout (APEAL) StudySM released today.

The APEAL Study, which serves as the industry benchmark for new-vehicle appeal, has been completely redesigned for 2013. The study, now in its 18th year, has been updated to better measure the appeal of today's vehicles, particularly with respect to the new technologies and features now being offered. Owners evaluate their vehicle across 77 attributes, which roll up into an overall APEAL score on a 1,000-point scale.

"Appealing vehicles are simply good news for both consumers and automakers," said David Sargent, vice president of global automotive at J.D. Power. "Even within the same vehicle segment, consumers are willing to spend substantially more on vehicles that they find attractive, provide the performance and utility they are looking for and have well-executed interiors. These vehicles also sell more quickly."

Analyzing some of the results of previous years' studies highlights the impact of APEAL on customer loyalty. Nearly two-thirds (64%) of owners whose vehicle achieved an APEAL score at least 100 points above the segment average repurchase the same brand the next time they shop for a new vehicle, compared with just 55 percent of those whose vehicle scored at least 100 points below the segment average.

"One percentage point of loyalty is worth tens or even hundreds of millions of dollars to automakers," said Sargent. "These companies are fighting for every last customer, and it is clear that appealing products remain the key to achieving this."

Chevrolet receives the highest number of segment awards of any brand for the Avalanche, Sonic and Volt models, all of which also received awards in 2012.

Ford and Nissan brands each receive two model awards: Ford, for the F-250/F-350 Super Duty and Mustang; Nissan, for the Armada and Murano.

The Land Rover Range Rover achieves the highest APEAL score of any model in the industry in 2013, which marks the first time a model outside the large premium car segment has done so.

J.D. Power offers the following tips to consumers when purchasing a new vehicle:

Have realistic expectations about the fuel economy of your vehicle, and remember that the city/highway/combined mileage ranges listed on the window sticker are merely estimates provided by the EPA. Your actual miles per gallon will vary due to many factors, including weather conditions, driving style, tire inflation and the overall condition of your vehicle.

Before you buy, ask your salesperson to demonstrate all of the audio/communication/ entertainment/navigation features on the vehicle. In particular, ensure the voice recognition system (if available) responds accurately to your commands. Also, have the salesperson assist you in pairing and connecting your wireless devices to the vehicle's audio and communication system.
Although exterior styling is an important part of a new vehicle's appeal for many consumers, consider all aspects of a vehicle to ensure it meets your needs. You want to enjoy your vehicle ownership for many years, not just for a few months.

The APEAL Study examines how gratifying a new vehicle is to own and drive, based on owner evaluations of 77 vehicle attributes. The study is used extensively by manufacturers worldwide to help them design and develop more appealing vehicles and by consumers to help them in their purchase decisions. The 2013 APEAL Study is based on responses gathered between February and May 2013 from more than 83,000 purchasers and lessees of new 2013 model-year cars and light trucks who were surveyed after the first 90 days of ownership. The APEAL Study complements the Initial Quality Study (IQS), which focuses on problems experienced by owners during the first 90 days of ownership.