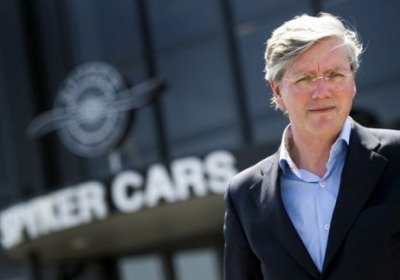 "Smack." That's the sound of Spyker's process server dropping a big ol' pile of legal documents on the doorstep of The Renaissance Center, home of General Motors – or wherever GM's attorneys live during business hours. Contained therein is a Complaint, filed in the U.S. District Court for the Eastern District of Michigan and demanding a jury trial, that seeks $3 billion in damages due to "the unlawful actions GM took to avoid competition with Saab Automobile in the Chinese market." Spyker accuses GM of "tortiously interfering" with Saab's business relationship with Chinese automaker Zhejiang Youngman Lotus Automobile (Youngman), actions that Spyker CEO Victor Muller (above) said "deliberately drove Saab Automobile into bankruptcy."

The interference in question specifically refers to the very last potential deal, called the Framework Agreement, that Spyker worked out with Youngman. With lots of GM engineering embedded into the 9-4X and 9-5, The General had the right to approve any Saab partnership that would involve the transfer of GM intellectual property. Spyker had been rebuffed over every previous deal with a Chinese firm, including two bids by Youngman, due to GM concerns over its IP getting into Chinese hands and having to face Chinese-market competitors using its technology. The Complaint alleges that the Framework Agreement would have put a firewall around all GM IP – Youngman would only work on Saab's Phoenix platform, said to be just about free of GM tech, and would have no access to 9-3, 9-4X or 9-5 technology until after Saab ceased all ties to GM.

Thoretically, as stated in the Complant, this should have spared Saab the need to even ask GM for permission to make the deal outlined in the Framework Agreement since it didn't involve any transfer of GM technology. GM felt differently and repeatedly, publicly proclaimed that the Framework Agreement couldn't proceed without GM's say-so, which GM would not give, and that led to Youngman walking away. It is those public proclamations by GM that Spyker alleges as tortious interference. That's the basics, but there's a lot more to be discovered in the 27-page Complaint, which can be found here.

Muller said they've been working on preparing the lawsuit since bankruptcy was declared last year, and with a view to a lengthy and heinously expensive court battle, Muller's golden touch with securing money has come through yet again: a third party has furnished Spyker with the "backing required to see the lawsuit through to the end." There's a press release below announcing the move, otherwise known as "the first shot."

Zeewolde, the Netherlands, 6 August 2012 -- Spyker N.V. ("Spyker") announced that it has filed a complaint against General Motors Company ("GM") in the United States District Court of the Eastern District of Michigan today at 08.00 AM EST. Spyker filed the complaint in its own right and on behalf of its 100 percent subsidiary Saab Automobile A.B., which was declared bankrupt on December 19, 2011.

This lawsuit seeks redress for the unlawful actions GM took to avoid competition with Saab Automobile in the Chinese market. GM's actions had the direct and intended objective of driving Saab Automobile into bankruptcy, a result of GM's tortiously interfering with a transaction between Saab Automobile, Spyker and Chinese investor Youngman that would have permitted Saab Automobile to restructure and remain a solvent, going concern. The monetary value of the claim amounts to US$ 3 billion (three billion US dollars).

Since Saab Automobile is in receivership and hence incapable to contribute to the costs of litigation, Spyker and Saab Automobile have entered into an agreement pursuant to which Spyker will bear the costs of such litigation in exchange for a very substantial share of Saab Automobile's award when the proceedings are successful. Spyker has secured the financial backing required to see the lawsuit through to the end from a third party investor.

Victor R. Muller, Spyker's Chief Executive Officer said: "Ever since we were forced to file for Saab Automobile's bankruptcy in December of last year, we have worked relentlessly on the preparation for this lawsuit which seeks to compensate Spyker and Saab for the massive damages we have incurred as a result of GM's unlawful actions.

We owe it to our stakeholders and ourselves that justice is done and we will pursue this lawsuit with the same tenacity and perseverance that we had when we tirelessly worked to save Saab Automobile, until GM destroyed those efforts and deliberately drove Saab Automobile into bankruptcy."

The Complaint, as filed this morning at 08.00 EST, is attached to this Press Release.