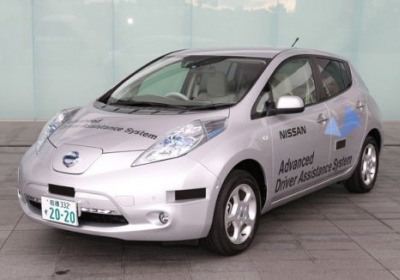 In order to meet its goal of having an autonomous car in production by 2020, Nissan is going to have be able to test its technology in real-world driving conditions. For this, the automaker has just received a license plate to legally test its semi-autonomous driver assist systems in Japan, marking the first time such technologies have been tested on that country's roads. Not ironically, the license plate number is 2020.

Though not fully autonomous, this Leaf prototype will test various components of a self-driving car including exiting the highway, the ability to stay in its lane and change lanes when needed, stopping at red lights and overtaking stopped or slow traffic. Nissan is also in the process of building a proving ground in Oppama, Japan dedicated solely to autonomous cars, but the ability to test on public roads will obviously play a crucial role in the development of these cars. Scroll down for a short video and press release Nissan posted to mark the occasion.

YOKOHAMA, Japan – Nissan President and CEO Carlos Ghosn today took delivery of Japan's first license plate for a car equipped with highly advanced driver assist systems. It clears the way for a Nissan LEAF equipped with the technology to be tested on the public roads in Japan for the first time. The research program will accelerate the development of technologies fundamental to Autonomous Drive. The systems are designed to allow the driver to manually take over control at any time.

The license plate includes the number 2020, which reflects Nissan's goal to be ready with multiple, commercially viable Autonomous Drive vehicles by the year 2020.

"This is an ordinary license plate for an extraordinary vehicle," said Nissan president and CEO Carlos Ghosn. "A month ago we revealed to the world our 2020 Autonomous Drive target. Road testing of the underlying technologies is critical to maintaining our leadership position and we are grateful to the Government of Japan for its support."

The Nissan LEAF to be tested is capable of a number of functions, including:
-Lane keeping
-Automatic Exit
-Automatic lane change
-Automatic overtaking slower or stopped vehicles
-Automatic deceleration behind congestion on freeways
-Automatic stopping at red lights

Nissan is developing Autonomous Drive as it works to achieve virtually zero fatalities in accidents involving its vehicles. The goal stands alongside zero emissions as a key pillar of Nissan's research and development. Autonomous Drive is an extension of the Nissan Safety Shield, which monitors a 360-degree view around vehicles for risks, gives warnings to the driver, and automatically intervenes if necessary. Work is already underway to build a dedicated Autonomous Drive proving ground in Nissan's facility in Oppama, Japan.

Nissan Executive Vice President for Research and Development, Mitsuhiko Yamashita, said: "The realization of the Autonomous Drive system is one of our greatest goals, because Zero Fatalities stands alongside Zero Emissions as major objective of Nissan's R&D. Through public road testing, we will further develop the safety, efficiency and reliability of our technology."

About Nissan Motor Co.
Nissan Motor Co., Ltd., Japan's second-largest automotive company, is headquartered in Yokohama, Japan, and is part of the Renault-Nissan Alliance. Operating with approximately 236,000 employees globally, Nissan sold more than 4.9 million vehicles and generated revenue of 9.6 trillion yen (USD 116.16 billion) in fiscal 2012. Nissan delivers a comprehensive range of over 60 models under the Nissan and Infiniti brands. In 2010, Nissan introduced the Nissan LEAF, and continues to lead in zero-emission mobility. The LEAF, the first mass-market, pure-electric vehicle launched globally, is now the best-selling EV in history.