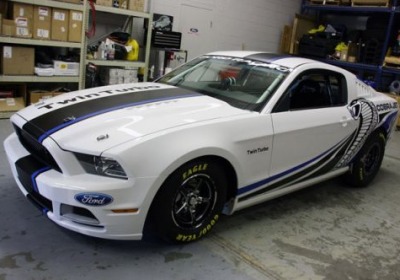 After wrapping up the first day of the 2012 SEMA Show, organizers handed out awards for some of the trendiest vehicles on display. Since the whole point of SEMA is to show off new products available in the aftermarket world for use in cars, trucks and SUVs, each year, the show distinguishes the most popular vehicle in various segments. Not surprisingly, this year's Hottest Car and Hottest Sport Compact are the Ford Mustang and Scion FR-S, respectively, while the Ford F-Series brought home the Hottest Truck and the Jeep Wrangler was named the Hottest 4x4-SUV.

More than 2,000 companies are at this year's show, and the display booths represents a "vote" for each car to determing the trendiest vehicles in each of the four categories. It isn't clear if these awards also take cars brought by OEMs into account, but the Mustang and FR-S were definitely well represented by both OEM and aftermarket show versions.

As usual, the OEMs showed up in force at the this year's SEMA Show exhibiting a variety of cars ranging from production-intent cars like the beastly Ford Mustang Cobra Jet to much flashier rides like Scion's Carbon Stealth FR-S.

We've obsessively covered Day One of the show already, but stay tuned for our continued live coverage.

"The SEMA Show has always been about innovative products and trends," said Chris Kersting, SEMA president and CEO. "The SEMA Award amplifies the industry's special ability to identify and set trends that consumers follow."

The SEMA Award recognizes vehicle models that specialty-equipment manufacturers believe are the best platforms for accessorization and that showcase the year's coolest products. It also underscores the cooperative relationship between the automakers and SEMA-member companies.

"The SEMA Award helps guide consumers toward the hottest-trending and most accessory friendly vehicles on the market," added Kersting. "Our SEMA Show exhibitors are industry visionaries who determine the winners of the SEMA Award based on the vehicles they showcase in their booths. Each booth vehicle represents a 'vote' and the most prominent models in each category are the winners."

The 2012 SEMA Show features more than 2,000 exhibiting companies that manufacture thousands of products designed to improve performance, safety and convenience, as well as those that enhance appearance and comfort. While products are available for every make and model, exhibitors are investing more in the Ford Mustang, Scion FR-S, Ford F-Series, and Jeep Wrangler than any other vehicles. Consumers, therefore, can expect to find great specialty products for accessorizing these vehicles.

To learn more about the SEMA Award winners and the products that are available for them, visit www.sema.org/semaaward.

About SEMA and the SEMA Show
The SEMA Show is a trade show produced by the Specialty Equipment Market Association (SEMA), a nonprofit trade association founded in 1963. Since the first SEMA Show debuted in 1967, the annual event has served as the leading venue bringing together manufacturers and buyers within the automotive specialty equipment industry. Products featured at the SEMA Show include those that enhance the styling, functionality, comfort, convenience and safety of cars and trucks. Additional details are available at www.SEMAShow.com or www.sema.org, 909/396-0289.