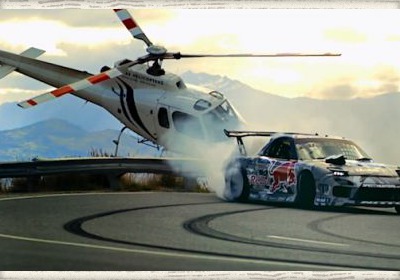 For the first time ever, the Crown Range, New Zealand's highest paved road, was closed off for the drifting pleasure of one man. That man is Mad Mike Whiddett, and the machine he's piloting is a heavily modified Mazda RX-7 sponsored by the energy-rich crew from Red Bull and powered by a 750-horsepower quad-rotor engine. There will be smoke. Lots and lots of smoke.

Mad Mike hits speeds in excess of 140 miles per hour over the course of the road's six and a half miles, which boasts 47 individual corners at over 3,500 feet of elevation. Scroll down for all kinds of fire-belching, tire-squealing and smoke-inducing action. Or, as Mad Mike himself puts it, "A dream turned into reality."


MAD MIKE'S DRIVE OF A LIFETIME

The Crown Range, New Zealand. 47 corners, 1076 metres elevation, 10.4km long. The country's highest paved roadway. For a moment in time it belongs to one man, Mike Whiddett. The moment will become, the drive of a lifetime.

The former state highway cuts a path between Queenstown and Wanaka. It is a short cut, which has long been a route for travellers. The first track dates back to the early gold rush days. The road now is still one of the most demanding and technical drives of the country.

The drive for Mike Whiddett will be challenging and faster than most. For the first time in NZ motorsport history, the road has been closed across three sections for a unique filming opportunity. The New Zealand based international drift driver has a chance to push his bespoke quad rotor rotary engine car to new limits on a completely clear road. The road closure signs are rolled out; it is time for Mad Mike to Conquer the Crown.

On paper, the first section of the road appears to be the trickiest. Seven consecutive hairpin turns on a near-vertical mountainside climb give the Switchbacks their name. The second section is all about speed. Whiddett pulls sixth gear along the Crown Terrace and winds the Mazda RX7's 750 horsepower engine out to its redline. He hits 232km/h before slowing, fleetingly pulling on the handbrake to lock the rear wheels before stomping back on the accelerator. The tyres erupt back into a spinning frenzy; black marks the bitumen. This is drifting nirvana in its purest form.

The run up to the Crown Summit is a fusion of high, medium and low speed bends, created to attack sideways. With barriers flanking the road at one side and exposed banks at the other, it mimics the mountain touge roads that the Japanese forefathers of the sport originally, and illicitly, ran by moonlight. The margin for error is slim here, but Whiddett never backs off as the final forty-seventh corner passes by in a blur.

"I think drifters have an innate ability to slip from reality when driving up a road like the Crown Range in normal circumstances. We imagine drifting through the turns, the gear changes, the footwork, the hand brake and of course stomping on the gas. So for me, having the opportunity to get behind the wheel of my machine, push it to the limit and conquer the Crown is a dream turned into a reality,"says Whiddett.