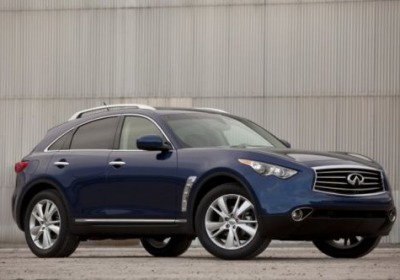 The Infiniti FX, soon to be renamed QX70 thanks to the Japanese brand's convoluted naming scheme, is currently in the midst of its second-generation. And while we like the compact, sporty crossover's driving character a lot, it lacks the "utility" part of the CUV moniker. That lack of cabin space will be addressed in the future, though.

Automotive News recently sat down with Nissan's global design boss, Shiro Nakamura, to talk about the future of what he called "the icon of Infiniti." And while Nakamura-san admitted the FX/QX70's worth to the brand, its sales have long been something of a disappointment. "Exterior and styling-wise, it's very strong as an icon. But to be honest, its sales volume has not been as big as we wanted," a reality Nakamura believes is due largely to its tight cabin relative to its competition.

Finding the right balance might be difficult, though. The FX/QX70 is selling extremely well in both China and Russia, according to Nakamura, because of its looks. Altering that style in order to increase interior space risks alienating a new and important group of buyers for Infiniti. The designer put it best when he told AN, " It is selling well in China and Russia because it stands out. So we want to maintain that striking look." As it stands, we'll likely be living with the current vehicle for a few more years – AN doesn't expect the third-generation of the FX/QX70 to arrive until 2015 or 2016.