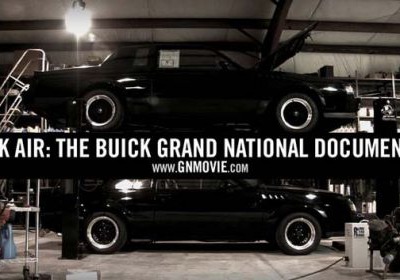 As Buick currently claws and scratches its way back into relevance to compete against luxury brands like Lexus and Acura, it's hard to believe that not too long ago, the brand had a car that was mentioned in the same breath as Corvette, Lamborghini and Ferrari. That car? None other than the Buick Grand National. All black with a turbocharged V6 and some of the quickest acceleration of its time, the Grand National, in today's standards, is along the lines of a 2013 Shelby GT500 with both cars essentially being a working man's supercar.

The last Grand National rolled off the assembly line in Flint, MI on December 11, 1987, and to mark the silver anniversary of that somber occasion, Black Air is a documentary of the Grand National from the perspective of the enthusiast, the collector, the media and even from those at General Motors responsible for creating such a sinister legend. Like the car itself, Andrew Filippone Jr. shoots the documentary in a raw fashion, and it definitely helps to show why a low-volume muscle car from the 1980s is still the object of obsession for many automotive enthusiasts to this day.

Black Air really does capture the story from all angles, starting from the moment the idea of the car was conjured up in 1980 by Buick's GM Lloyd Reuss to be a "radically different" car, intent on lowering the age demographic of Buick buyers. Three possible design directions were sketched in 1980 including the "stripe package" model that debuted in 1982, but it wasn't until 1984 that the monochromatic black paint scheme and turbocharged 3.8-liter V6 engine, which are now synonymous with the Grand National name, came to fruition.

We also get the viewpoint of automotive journalists from Car and Driver such as Csaba Csere and Tony Assenza. Csere talks about the first time he drove the Grand National in eight-degree Michigan weather, and the car laid down a 0-60 time of just 4.9 seconds – faster than a Ferrari Testarossa and Lamborghini Countach. During burnouts, Csere said "the tires... made not the squealing sound... it was a harsher sound almost like the tread was being ripped off the tires."

Being an enthusiast and collector car, Filippone managed to capture many different stories of Grand National ownership drawing a close relation with how loyal and passionate Ferrari owners are. The cover of the movie calls the car a "strange and curious misfit," and over the course of the film, this is backed up by the fact that it seems like the Grand National caught many of its enthusiasts off guard – like Richard Clark. Clark first met the Grand National in losing to a friend in a drag race with his Ferrari, and now his North Carolina shop has become a Mecca for GN and GNX lovers.

Bob Colvin's Grand National story might be the most impressive for Grand National fans, though. Colvin, from Springhill Motor Company in Springhill, Louisiana, campaigned to get the last GN to be built, and after Buick agreed, he was on hand to document his car as it was being built at Buick City. Not only was it the last Grand National ever built, it also marked the closure of that particular line, and Colvin points out that while many of the line workers were losing their jobs, they were still cheering as the car was being assembled. Colvin still owns the car (which during the movie had less than nine miles on the odometer), and it is preserved in an air conditioned room in his house.

With the end looming, GM celebrated the end of the boxy, rear-wheel-drive G-body cars with the more powerful GNX in 1987 created as a collaboration between Buick and ASC/McLaren giving the fast and powerful Grand National even more speed and more power. In the end, Colvin's car rolled off the line in a bittersweet moment that marked the end of a plant and the beginning of a legacy for the car.

Like any other piece of automotive history, the movie documents cars that have been sealed away in garages, those still laying down rubber on the quarter-mile and even some that are being reborn. In addition to the 70-minute feature part of the film, there are also a pair of interesting presentations recorded during the 2011 Buick Performance Group Nationals (about 43 minutes each) with former GM employees Ron Yuille, a staff engineer talking about the development of the GN's turbo V6, and David Roland who worked on the GNX project. Black Air is only available on DVD starting December 11 on GNMovie.com with a cost of $20 plus shipping.

The timing for this documentary's release couldn't have been better as recent rumors indicate GM might be trying to revive the Grand National and GNX names for new, high-performance Buick models. Also, with the holiday season coming up, this movie is a must-have for fans of the Grand National, and it could be a great movie to watch for any non-enthusiasts, too, as a glimpse into what can spark such a passion.