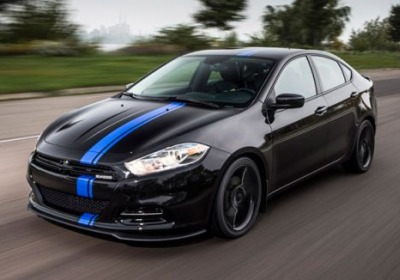 For the past few years, Chrysler's Mopar in-house tuning division has created its own one-off versions of several cars in the automaker's portfolio, including the Mopar '10 Challenger, Mopar '11 Charger and Mopar '12 300. For 2013, the black-and-blue up-do has been given to the new Dart compact, and Chrysler has announced that the limited-edition sedan is now available for order, priced from $25,485, not including *$995 for destination.

Like previous Mopar edition vehicles, the Dart is painted in a signature Pitch Black exterior with an offset blue racing stripe. The sedan sits seven millimeters lower to the ground and gets visual add-ons like a chin spoiler, decklid spoiler and rear diffuser, along with gloss black 18-inch alloy wheels.

Inside, Katzkin leather covers the Dart's seats, with the driver's seat done up in blue with black accents (the other seats are black with blue accents). Other standard equipment inside includes Chrysler's Uconnect system with the 8.4-inch touchscreen, premium floor mats and a sport pedal kit.

Scroll down for the full details in Chrysler's press blast.

Every Dodge Dart leaves the Belvidere, Ill., factory with attitude, but only 500 will reach dealers with Mopar attitude right off the truck. Dealers are taking orders now for the limited-edition 2013 Mopar '13 Dart, which carries a manufacturer's suggested retail price of $25,485 (plus $995 shipping).

The Mopar '13 Dart arrives this summer. Each wears a signature Pitch Black exterior with offset Mopar blue racing stripe running from nose to tail. That's a color scheme similar to previous Mopar editions of the Dodge Charger, Challenger and Chrysler 300.

Power for the Mopar '13 Dart comes from the MultiAir turbocharged and intercooled 1.4-liter four-cylinder engine, rated at 160 hp at 5,500 rpm and 184 lb-ft of torque, mated to a six-speed manual transmission. The car announces its arrival with a Mopar sport-tuned exhaust.

Ride height of the Mopar '13 Dart is 7 millimeters lower than the base Dart and that low and mean look is accented with a Mopar ground effects kit – chin spoiler, deck-lid spoiler, and rear diffuser – and low-profile 225/40R18 tires mounted on gloss-black 18-inch wheels. The Mopar '13 Dart also gets premium disc brakes with slotted rotors and a revised calibration for the power steering.

Each Mopar '13 Dart will be delivered with a personalized owner kit in a custom-made black case. The kit includes a personalized plate with vehicle specifications, unique identification number and production date; a limited-edition sketch of the car signed by Mark Trostle, Chrysler Group Chief Designer for the Mopar Brand; a copy of the Mopar '13 Dart brochure and other memorabilia.