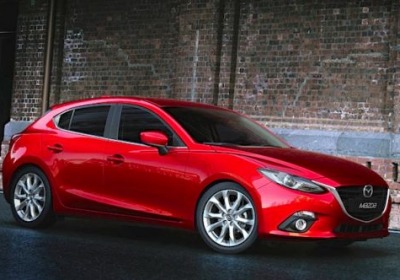 Mazda has officially pulled the sheets off of its 2014 Mazda3. The all-new compact boasts a wheelbase that's a full 2.4 inches longer than the outgoing model, yet the hatchback is a nearly two inches shorter from stem to stern. The machine is also lower and wider than before, which should give occupants plenty of space indoors. The driver gets treated to a new human-machine interface that features a new Active Driving Display for information like vehicle speed and navigation instructions conveniently in the line of sight. Likewise, the vehicle's infotainment system has received a complete rebuild.

Outside, the new Mazda3 makes full use of the company's KODO design language, and to our eyes, the result is one of the most attractive entries in the segment. Jump under the hood, and buyers can expect to find a Skyactiv-G 2.0-liter gasoline engine with 155 horsepower and 150 pound-feet of torque, though no fuel economy estimates are available. For those looking for a bit more thrust, Mazda also offers a 2.5-liter Skyactiv-G gasoline mill with 184 hp and 185 lb-ft of torque. So far there's no word on the diesel engine available to our friends in Europe.

Both engines can be mated to either a six-speed manual or a six-speed automatic and feature the automaker's i-ELOOP brake energy regeneration systems. The recaptured energy is stored in a capacitor and used to power the vehicle's various electrical systems.

Mazda says the company's newest compact features a chassis that's a full 30-percent stiffer than the 2013 model thanks in part to extensive use of high-strength steel. The material also let Mazda cut around 200 pounds from the vehicle. Expect pricing, availability and fuel economy information to surface later. In the interim, you can read the full press release below for more information. We'll have more photos to share shortly, so stay tuned.

NEW YORK (June 26, 2013) – The all-new 2014 Mazda3 compact five-door was revealed to the world today during an event in Manhattan's Chelsea neighborhood. After weeks of media speculation and numerous "leaked" images of enthusiast renderings, Mazda North American Operations (MNAO) pulled the sheet off the highly-anticipated redesign and confirmed the car will be on-sale this fall. The all-new Mazda3 is engineered with the full complement of SKYACTIV®1 technologies – a proprietary suite of fuel-efficient, performance-driven components and manufacturing philosophies – as well as the handsome styling of the KODO design language. Other launch events also were held in Melbourne, Istanbul, St. Petersburg and London to debut the new vehicle, as well as celebrate the 10th year of Mazda3 production.

"With more than 3.5 million vehicles sold globally, the Mazda3 is the brand's best-selling and most recognizable name plate, and its redesign for 2014 shows just how much attention to detail and care we put into this important vehicle," said Jim O'Sullivan, president and CEO, MNAO. "SKYACTIV TECHNOLOGY and KODO have performed as advertised and received critical acclaim, with even more technologies and materials to be introduced with the 2014 Mazda3. On the heels of the launch of the 2013 CX-5 crossover SUV last fall and the 2014 Mazda6 early this year, this is an exciting time for Mazda, and we're only getting started."

Lower and leaner than its predecessor, this third generation Mazda3 shares almost nothing with its older siblings other than a name. All new from the ground up, the 2014 Mazda3 sits on a wheelbase of 106.3 inches, which is 2.4 inches longer than the previous generation, yet the hatchback is 1.8 inches shorter in length at 175.6 inches. With a height of 57.3 inches and a width of 70.7 inches, the Mazda3 reduces its ceiling by 0.6 inches and gains 1.6 inches in the hips while retaining similar headroom space and offering rear legroom at 35.8 inches. The rear seatbacks are nearly 2.0 inches taller for added passenger comfort. Front and rear shoulder room also has increased to 57.2 and 54.4 inches, respectively. This efficient use of space is wrapped in the increasingly striking dimensions of KODO, Mazda's "Soul of Motion" approach to designs that exude emotional proportions and refined strength.