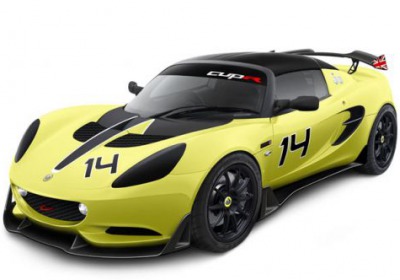 If you want to take a Lotus to the track but the Exige V6 Cup is a bit too much to handle, the boys from Hethel have a new offering that may be of interest.

The new Elise S Cup R features all the track-tuned bells and whistles of its six-cylinder brethren, including a competition-spec aero kit, adjustable suspension, Yokohama racing slicks on 17-inch forged alloys, tow hooks, remapped ECU, cross-drilled and ventilated disc brakes and an interior with a HANS-compatible bucket seat, six-point racing harness and quick-release steering wheel. But instead of a heavier and more powerful V6, the Elise S Cup R "adds lightness" with the same 1.8-liter supercharged inline-four with 217 horsepower and 181 pound-feet of torque as the road-going Elise S. Yet with all that track-tuned gear, it's a good four seconds per three-mile lap faster than the showroom stock version in the automaker's testing.

Interested parties can pick one up in the UK for £39,125 (before taxes, equivalent to about $63k) and either lap it to their hearts' content at private track days or enter it in one of the dozen Lotus Cup series operating around the world. Lotus only released this one photo (click above to enlarge), but you can check out the full specs in the press release below.

Evolving from the 1.6 litre Elise platform, this is the first time the supercharged Elise S' mid-mounted, transverse, 1.8 litre 2ZR-FE engine has been used in a Cup variant. Priced at £39,125 + VAT and boasting bespoke livery and aerodynamic body kit, the Elise S Cup R showcases the marriage of form and function perfectly so that performance is optimised yet retains its stylish and iconic aesthetic.

Performance is enhanced over the road-going Elise S thanks to a motorsport-specific engine control module (ECM) and a CFD proved aero pack comprising; front splitter, barge boards, winglets, rear diffuser, floor extensions and rear wing. Despite the extra body kit and race-ready additions, Lotus Motorsport manages to maintain the road car's light weight of just 924 kg. These modifications and the clever manipulation of air-flow to create extra downforce, combined with adjustable damper and springs, reduces lap times by 4 seconds on a 5 km lap over the standard Elise S.

The Lotus S Elise Cup R is eligible for entry to the production class in the 2014 Lotus Cup series which operates under the banners Lotus Cup UK, Lotus Cup Europe, Lotus Cup Italia, Lotus Cup USA, Lotus Cup Japan, Lotus Cup Thailand, Lotus Cup China and Lotus Ladies Cup. The Lotus Cup is open to all Lotus owners and their Elise, Exige, Evora, 340R and 2-Eleven. To make a statement on some of the best tracks in the world, the Elise S Cup R has a selection of bespoke colour and trim options courtesy of the Lotus Design team.

The Elise S Cup R at a glance: