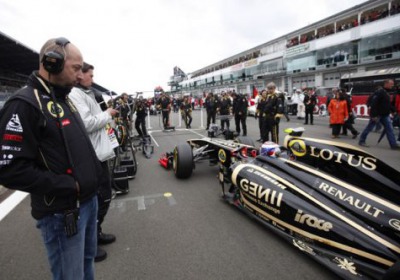 The Lotus F1 team has fallen on some hard times. Majority-owned by investment firm Genii Capital and having little to do with the British automaker with which it shares its name, the Enstone-based outfit has been widely reported to be in serious financial trouble. The extent of those difficulties were until now unknown, but a new report from Germany's Auto Motor und Sport reveals that the team is in the red to the tune of £114 million – equivalent to $186 million at today's conversion rates.

The lack in cashflow is widely believed to have been the impetus for Kimi Raikkonen's departure from the team in order to return to cash-rich Ferrari, and was one of the major factors in selecting Pastor Maldonado to replace him instead of a more proven and accomplished driver of Raikkonen's caliber. Maldonado brings with him major sponsorship funds from Venezuelan state oil company PDVSA. In speaking with the German publication, however, Lotus F1 chairman (and Genii co-founder) Gerald Lopez revealed that the lion's share of the team's debt – £80 million or $130 million – is with Genii Capital itself, a negative balance that isn't likely to affect the team's day to day. That leaves about $56 million which the team owes to outside parties, including Raikkonen, who has yet to receive the full pay he was contracted for.

The team has opted to sit out the first test session of the Formula One season at Jerez. Its 2014 chassis isn't ready and, given the relatively cold temperatures at this point in the year, the team wouldn't expect to learn much about tire performance and degradation. As far as the new engine goes, Lopez says that any knowledge gleaned by Red Bull, Toro Rosso and Caterham at the test session will ultimately be shared with Renault and through it back to Lotus as well. Lotus engineers helped develop the new KERS system with Renault regardless, so the team already has the energy-recovery data it needs. The team will instead prepare for the second test session in Bahrain, by which point it aims to have its new car ready to kick off the season. Lopez says that it has secured the funding to offset its costs for the season ahead, and that it is working to pay down its debt.