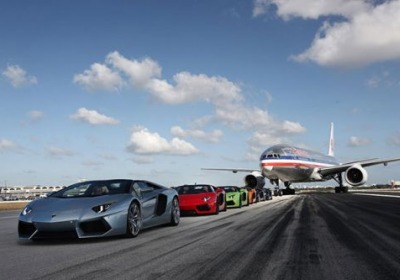 Lamborghini is only starting to throttle the engines on its 50th anniversary celebrations. The company lined up fifty of its Italian jobs for a cannonball run down the south runway at the Miami International Airport, the Aventador Roadster breaking 200 miles per hour, then ran them all through the streets of Miami to be properly introduced to one of their most ardent clienteles.

Contrary to the appearance of the image above, no airplanes had to wait to taxi behind the ground-based flyers. Not that any of them would have had to wait long, though, since the 700-horsepower Aventador Roadsters were exceeding the lift-off speeds of commercial airliners by at least 30 mph.

There's a press release and a video below, along with a gallery of high-res photos of the day's events. Enjoy.

Miami, Florida, January 28, 2013 – Today at Miami International Airport five new Lamborghini Aventador LP 700-4 Roadsters sped down the south runway of the busiest U.S. airport for international flights. With special authorization from the Federal Aviation Administration (F.A.A.) and Miami-Dade County the Lamborghinis, for the first time ever, exceeded the passenger airliner takeoff speed on a runway which is between 150 mph and 180 mph. No current jet aircraft reaches 210 mph on the ground, the clocked speed of the 700-horsepower vehicles during the closed-course drive demonstration.

Prior to the high speed demonstration, the Lamborghinis were joined by an American Airlines Boeing 777 and lined-up for a photo shoot on the runway. Due to integrated planning on behalf of Miami-Dade officials and the FAA, there was no impact on flight arrivals and departures.

Today's event, the kick-off of a 10-day media launch and dealer education program, began with an unveiling press conference in Lummus Park at Miami Beach. The ceremonies continued with a 50-vehicle parade down Collins Avenue in South Beach before culminating in the runway drive. Lamborghini executives hosting the press conference included Stephan Winkelmann, President and CEO of Automobili Lamborghini S.p.A., as well as Maurizio Reggiani, Director of R&D, Raffaello Porro, Director Communications and External Relations, and Filippo Perini, chief designer.

"It has been a great pleasure to work with the Miami-Dade Aviation Department and South Beach teams on today's amazing demonstrations. I have never seen something similar at a Lamborghini event," said Stephan Winkelmann. "The Aventador Roadster is our most exciting production car
ever and I can think of no better place to celebrate its launch than here in Miami."

The Aventador Roadster is the newest open-top version of Lamborghini's flagship vehicle. With a 700-horsepower, 6.5-liter V12 engine, the Aventador Roadster reaches 60 mph in less than three seconds and boasts a top speed of 217 mph. The vehicle's removable top features high-tech, lightweight carbon fiber technologies to achieve a low weight of just 26 pounds.

"Lamborghini is a forward-thinking brand, and today's event on our runway was an all-around success," said Ken Pyatt, Miami-Dade Deputy Aviation Director. "Both our organizations are focused on efficient performance and providing our customers with innovations."

Automobili Lamborghini S.p.A.
Founded in 1963, Automobili Lamborghini is headquartered in Sant'Agata Bolognese, in Northeastern Italy, where it manufactures some of the world's most coveted super sports cars. With the introduction of the Aventador LP 700-4 in 2011 and the debut of the Urus concept SUV at the Beijing International Automobile Exhibition in 2012, Lamborghini has established yet another landmark in the history of luxury super sports cars. And with more than 120 dealerships worldwide, Automobili Lamborghini has successfully created an uninterrupted series of extreme, exclusive super sports cars that include the 350 GT, Miura, Espada, Countach, Diablo, Murciélago, Reventón Coupé, Reventón Roadster, Gallardo LP 560-4 Coupé and Spyder, and the Gallardo LP 570-4 Superleggera and the open-top LP 570-4Spyder Performante.