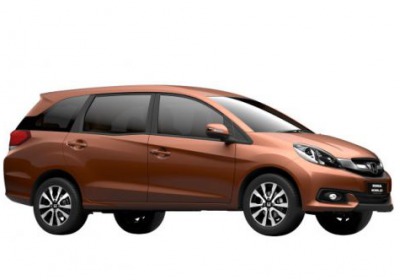 Sometimes, vehicles developed for mainstream markets don't work as well in emerging markets due to a lack of infrastructure for which they were originally designed. Indonesia is one of those environs where vehicles that are low, long and wide struggle cover the country's often rough terrain, let alone fit into the nation's compact parking spaces. Taking this into account, Honda has been developing the Mobilio multi-purpose vehicle (MPV), which it teased in July, based on research conducted on the country's roads and weather conditions. Today the Japanese automaker unveiled a prototype of the MPV at the Indonesia International Motor Show.

The Mobilio has three rows of seating for seven occupants, is compact enough to fit into the country's parking spaces, which are often less than 14.4 feet in length, and has a sports utility vehicle-like ground clearance of 7.3 inches to handle most road conditions. It's equipped with a 1.5-liter i-VTEC four-cylinder engine, which should give the MPV good fuel economy.

On September 11, Honda also introduced the Brio Satya five-door hatchback (shown at right) for the Indonesian market, which features an i-VTEC four-cylinder engine that Honda says will help the car net a fuel economy rating of 20 kilometers per liter of gasoline (equivalent to 47 miles per gallon). The model is closely related to the Brio budget hatchback, which was first revealed back in 2011.

Both vehicles will be built in a Honda Prospect Motors (HPM), a joint-venture manufacturing and sales facility in Karawang, Indonesia. For a bit more information, take a look at the press release below.

The Honda Mobilio will be Honda's first model to be introduced in the lower priced MPV category, which is the best-selling category in the automobile market in Indonesia. Honda developed this model based on the research conducted in Indonesia regarding local road and weather conditions, and customer needs. While offering a spacious cabin space with a three row seat configuration for seven occupants, the Honda Mobilio features a compact-sized body fitting the general size of parking spaces in Indonesia which are of less than 4.4 m in length. Moreover, taking local road surface conditions into consideration, the Honda Mobilio features a ground clearance as high as 185mm, which is equivalent to the ground clearance of SUVs while achieving nimble driving performance. Equipped with a 1.5L i-VTEC™ 4-cylinder gasoline engine, the Honda Mobilio will go on sales realizing both excellent driving performance and fuel economy. Production will be at the second plant of HPM which will become operational in January 2014 in the Karawang region of Indonesia.

The Brio Satya, which Honda introduced on September 11, 2013 prior to the motor show, is equipped with a 1.2L i-VTEC gasoline engine, achieving more than 20 km/L low fuel economy, which will qualify for LCGC program. This model will also be produced locally at the Karawang plant of HPM, realizing local content as high as 85%. To coincide with the production of the Brio Satya, HPM will expand the annual production capacity of its existing plant from the current 70,000 units to 80,000 units. Combined with the capacity of the second plant, which will become operational in early 2014, the overall annual production capacity of HPM will reach 200,000 units.

In addition to these new models, HPM exhibited the next-generation super sports model NSX Concept, as well as the new Brio Sports (1.3L), a successor model to the Thai-made Brio which became the best-selling vehicle in its class with sales of approximately 15,000 units* in the first 12 months since August 2012 in Indonesia.

* Honda Caluculations as of August 2013