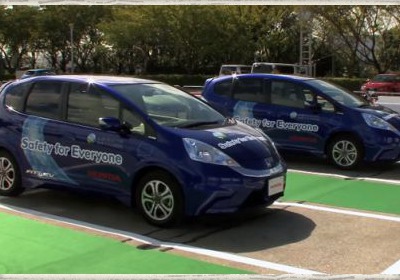 There are many challenges that will need to be sorted out before full autonomous driving becomes a reality, but automakers are taking small steps toward this advancement with semi-autonomous technologies. Nissan, Toyota and Ford have already revealed various automated driving systems, and now Honda is getting into the game with an automatic valet parking system that was unveiled recently at the Intelligent Transportation Systems (ITS) World Congress in Tokyo.

Unlike Ford's recently demonstrated self-parking Focus, which is fully operational on its own, Honda's new system requires input from the parking lot via cameras. Combining information provided by the car's rearview camera as well as cameras positioned around the parking lot, drivers are able to drop their car off at a central location, and using a touchscreen display, the car can park itself and return when the driver is ready to leave. The benefit of this is that multiple cars can be parked at the same time and no additional sensors (other than a backup camera) are needed for the car, but the downside is that it can only operate on properly equipped parking lots. According to Honda's demonstration, this system can be practical by 2020.

Honda also showed off some semi-autonomous driving and non-contact electric vehicle recharging technologies at the ITS World Congress, although information is limited and there are no demonstrations available. Scroll down to read more about Honda's latest tech, including a video demonstration of the automatic valet parking system.

Furthermore, at its outdoor exhibition space, Honda will unveil, for the first time in the world, a safety driving demonstration using the Cooperative Autonomous Driving technologies. Honda is developing the Cooperative Autonomous Driving technologies to help motorcycles, automobiles, electric carts and pedestrians work cooperatively through communication and sensing technologies, providing safe and convenient services without compromising the fun and excitement of mobility. In addition, as a part of the parking assist system, Honda will conduct the safe and convenient Automatic Valet Parking demonstration, using a low-cost on-vehicle system which works cooperatively with security cameras installed at parking facility.

*
ITS = Intelligent Transportation Systems
[ Key items at the exhibition ]

The demonstration automobile equipped with autonomous course environment recognition technology demonstrates automatic driving on a narrow road as well as automatic stop and start based on the recognition of pedestrians via on-vehicle cameras. In addition to a safe drive assisting function based on communication between a pedestrian and a car and coordinated communications among motorcycles, automobiles and electric carts, the detection of vehicles parked on the road via on-vehicle radar and automatic lane change after confirming the backward safety will be demonstrated as well.

Using this system, a vehicle fitted with a Wi-Fi system and ordinary rear-view-camera, will automatically drive from the drop-off point of the parking facility to an available spot and park itself. When the driver is ready to leave, the vehicle is called for and will automatically drive itself to the pick-up area. The system utilizes wireless communication between the vehicle and a series of cameras placed in the four corners of the parking facility. No special sensor needs to be fitted to the vehicle. The Automatic Valet Parking System is designed to realize safe and efficient parking of multiple vehicles. It could be used to enhance the shopping experience for customers at a large shopping center or to support well-organized and safe parking in large parking lots.

Striving to realize an accident-free society, in addition to a safe drive assisting function which utilizes on-vehicle sensors such as cameras and radars, the information necessary for safe driving through an intersection with poor visibility or during a right turn will be provided using wireless communication technology. Moreover, Honda's comprehensive initiative to provide useful information for safe and efficient transportation from its server will be explained at the exhibition using a video image and a diorama. The useful information provided through this system utilizing floating car data includes rerouting guide to roads with no traffic congestion and the notice of spots where sudden braking frequently occurs. In order to enable visitors to experience this system, the Motorcycle Riding Simulator and the Automobile Driving Simulator will be made available at the Honda booth.

As a part of Honda's initiatives toward realization of a sustainable society where people can enjoy life, Honda will introduce the next-generation solar-powered hydrogen station installed on the property of the Saitama prefectural government's office as well as the demonstration testing of household energy generation and consumption using HSHS(Honda Smart Home System)-equipped houses Honda built in the vicinity of Saitama University. Furthermore, Honda will conduct demonstrations of the automatic parking and futuristic non-contact recharging of a vehicle at home.