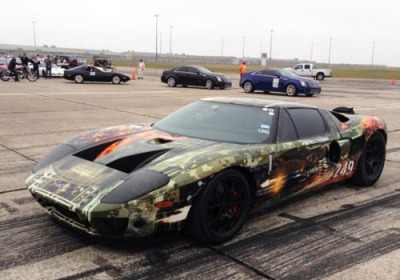 The record-setting Hennessey-powered camouflage Ford GT we showed you at this time last year headed back to the Texas Mile and managed to bring home yet another record. As you may recollect, last year saw Mark Heidraker's machine sprint to a record 257.7 mph thanks to propulsion from its twin-turbo 5.7-liter V8. The big mill sucks down race gas, and this year the creation pulled off a 267.6-mph run over the weekend. That feat set a new record for the event. Something tells us neither Heidraker nor Hennessey are done squeezing more thrust from this machine.

This particular Ford GT has already gone through a number of permutations. Hennessey started by tweaking the factory supercharger set up before abandoning the blower in favor of two turbos. Since then, the crew has poked and prodded it to coerce as much grunt as possible out of the car. We expect Hennessey will probably come out with a video of the record-setting run shortly, but in the meantime, you can see a couple of videos of the car's runs in Texas below (one of which actually captures the record run). Enjoy.