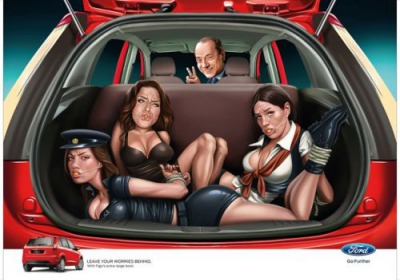 Apparently sensibilities in India, at least in the case of some Ford marketing partners, are downright lascivious at times. Case in point are a new series of print ads, presumably touting the vast cargo capacity of the Ford Figo hatchback, that involve more than a whiff of T&A, S&M and other sexy abbreviations.

In all seriousness, the advertising campaign is taking some major heat in the Indian press for being outrageously sexist. All three images – which seem to be produced by a graphic artist with some Heavy Metal work in his/her portfolio – show bound and gagged people stuffed into the Figo's boot. With a tagline reads, "Leave Your Worries Behind." one version features a peace-sign throwing Silvio Berlusconi holding hostage three buxom and barely clad women, all wearing ball gags with hands and feet bound. Charming. Another version shows Paris Hilton ­similarly kidnapping a trio of Kardashians, while a third (tame in terms of the clothing at least), has Michael Schumacher toting Sebastian Vettel, Fernando Alonso, and Lewis Hamilton.

Clearly in bad taste, at least, the Indian source also questions the timing of these risqué Ford ads, as the follow by days new anti-rape legislation passed by the Indian Parliament. Ford has responded in a statement, that it and its advertising partner (JWT India) "deeply regret" the ads, and claim that they "never should have happened."