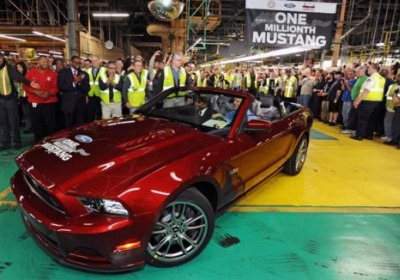 Yesterday, the Ford Mustang turned 49 years old, and Ford didn't miss the opportunity to celebrate the one millionth version of the Mustang rolling off the assembly line at the Flat Rock Assembly plant. Production of the Mustang at Flat Rock coincided with the fifth-generation design launching in 2004, and the one millionth car was the car shown above, a 2014 GT convertible painted in Ruby Red.

In total, Ford has sold more than 8.5 million Mustangs since the original car went on sale, but some of the key milestones over the car's nine years at Flat Rock include the Shelby GT-H, Bullitt, Boss 302 and, of course, the 662-horsepower Shelby GT500. Scroll down for a press release celebrating Flat Rock's milestone Mustang.

FLAT ROCK, Mich., April 17, 2013 – Happy Birthday Mustang! Forty-nine years to the day after its 1964 debut in New York, the iconic sports car celebrates another milestone: One million Mustangs have rolled off the line at Ford's Flat Rock Assembly Plant since production moved there in 2004. Ford is celebrating this milestone as year 50 of continuous Mustang production gets under way at Flat Rock Assembly.

Raj Nair, group vice president for global product development, today rode off the line at Flat Rock Assembly Plant in a Ruby Red 2014 Mustang convertible. Nair was riding shotgun with Ed Salna, material planning and logistics manager at the plant. Salna is a 27-year veteran of Flat Rock Assembly, starting work there more than a year before the plant produced its first car.

"Mustang is one of the most beloved nameplates in the industry, with fans around the world and throughout Ford Motor Company," said Nair. "The team here at Flat Rock Assembly has built an outstanding reputation for quality while producing one million Mustangs over the last nine years, and we expect that to continue for many years to come."

Ford has built Mustangs near its home base in Dearborn, Mich. for 49 years. The car was built at Ford's famous Rouge factory, just a few minutes from company headquarters, for four decades before moving a few miles south to Flat Rock in 2004.

Introduced in April 1964, Mustang proved to be far more popular than anyone expected, prompting Ford to add production capacity outside Michigan. By early 1965 plants in Metuchen, N.J. and San Jose, Calif. were also building Mustang. Less than two years later, on Wednesday, March 2, 1966, the one-millionth Mustang rolled off the line in Dearborn. To date, Ford has produced and sold more than 8.5 million Mustangs.

The launch of Mustang production at Flat Rock coincided with introduction of the then all-new fifth-generation model – first in the series to get a dedicated platform. In addition to the standard V6 and the V8-powered GT model, Mustangs coming out of Flat Rock Assembly Plant have included several special editions and race cars:

-In 2006 Flat Rock built a limited run of black and gold Shelby GT-H coupes for Hertz rental fleets to commemorate the 1966 Shelby GT350H rental car
-2007 brought the debut of the Shelby GT500 Mustang developed by SVT with a supercharged 5.4-liter V8 producing 500 horsepower, the most ever for a Mustang then
-For the 2008 and 2009 model years, the Mustang lineup included the Bullitt, inspired by the car driven by the title character in the 1968 film of the same name
-For the 2012 and 2013 model years, Flat Rock built the track-optimized Boss 302
-The Flat Rock line has produced numerous competition versions of Mustang including the FR500, Boss 302R and the extremely successful Cobra Jet drag racer

The Flat Rock factory has been producing vehicles since 1987, when it opened as Mazda Motor Manufacturing USA and built the Mazda MX-6. In 1992 Ford purchased a 50 percent share in the plant and it was renamed AutoAlliance International. Over the years Flat Rock Assembly has produced the Mazda 626, Mazda6, Mercury Cougar and Ford Probe. In addition to Mustang, Flat Rock will add production of the Fusion sedan later this year.

"Flat Rock has gone through an amazing transformation over the past year," said Tim Young, plant manager, Flat Rock Assembly Plant. "We've invested $555 million including a state-of-the-art, fully flexible body shop and an upgraded paint shop to make sure we're continuing to build the best of the best for the next one million Mustangs."

"The one-millionth Mustang is a true testament to the hard work and dedication of the Flat Rock Local 3000 membership," said Tony Bondy, UAW Local 3000 chairman. "It's been great building an iconic American car since 2004, and with the introduction of Fusion along with our new plant upgrades, we will keep building world-class quality in Flat Rock for years to come."

Ford is adding 1,400 jobs and a second shift at Flat Rock Assembly Plant to support new Fusion production as part of its plan to add 12,000 hourly jobs in the United States through 2015.