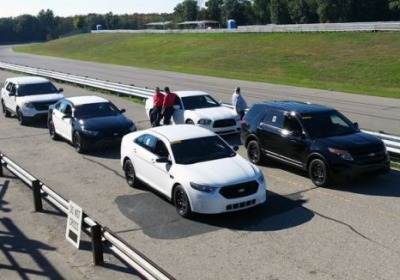 Just last month, Ford announced its first-ever non-pursuit-rated version of the Police Interceptor sedan for agencies looking to maximize fuel economy, but that doesn't mean that Ford is giving up on chasing down the bad guys. While the Dodge Charger can lay claim to the fastest lap time at the Grattan Raceway test facility held by the Michigan State Police, the results are now in for the Police Vehicle Evaluation acceleration tests. And Ford's Police Interceptor duo (sedan and utility) came out on top.

In the acceleration tests, Ford says that the Taurus-based PI Sedan with the newly available 3.5-liter EcoBoost V6 was the quickest among prospective police cars in both 0-60 and 0-100 mile per hour times. The sedan posted a 0-60 time of 5.66 seconds with all-wheel drive and 5.71 seconds with front-wheel drive, besting V8-powered competitors like the Chevy Caprice and Dodge Charger by more than 0.3 seconds. These rivals close the gap on the AWD sedan in the 0-100 test with the Ford taking 13.5 seconds compared to the Chevy's time of 14.35 and the Dodge's time of 14.7.

As for utility vehicles, the Explorer-based PI Utility, which accounts for 60 percent of Ford's police vehicle sales, essentially went head-to-head with the V8-powered Chevy Tahoe with similar results. Equipped with the new EcoBoost engine option, this big SUV hit 60 mph in just 6.28 seconds and 100 mph in 15.51 seconds compared to times of 8.22 seconds and 21.95 seconds, respectively, for the Tahoe. Other important tests in the PVE include braking and top speed, but while no automakers have stepped up to boast about their numbers in either of these categories, Ford's images show that the V8 Caprice had the highest top speed of the cars at 155 mph while the Tahoe's 139-mph speed made it the fastest utility vehicle.

"These tests conducted by the Michigan State Police are an important validation of best-in-class performance in outright acceleration – the most critical measure of police pursuit vehicles," said Bill Gubing, Ford chief engineer. "Agencies tell us if the bad guys see the police vehicle quickly close in pursuit, they're less likely to try to run. If this can help reduce the number of high-speed chases, then we could improve public safety on our nation's roads."

The new Ford Police Interceptor 3.5-liter EcoBoost-powered utility vehicle made its debut in Michigan State Police testing, and while competition was close among sedans, the Ford utility left its rivals in the dust. Compared to the 5.3-liter V8-powered Chevrolet Tahoe, which posted a 0-60 mph time of 8.22 seconds and a 0-100 mph time of 21.95 seconds, the Ford Police Interceptor utility vehicle with standard all-wheel drive hit 60 mph in 6.28 seconds and 100 mph in 15.51 seconds.

Ford Police Interceptors are gaining attention with agencies nationwide as a means of balancing law enforcement's need for speed in pursuit-rated vehicles with the need to save money. Switching from traditional V8-equipped police vehicles to powerful but more efficient Ford EcoBoost V6 vehicles achieves that.

With Ford's announcement in September of a new non-pursuit-rated, fuel-efficient 2.0-liter EcoBoost-equipped Special Service Police sedan, the company now offers law enforcement agencies the power of choice when they want to maximize efficiency and power.