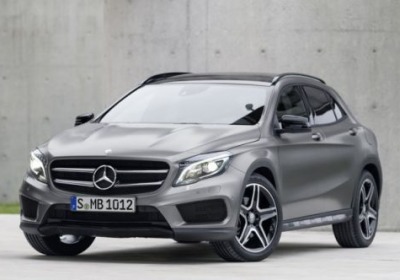 Brazil is the place to be, apparently. Toyota has been investing in the South American country, as has BMW, which announced a $261 million investment in October 2012, on the heels of an Audi factory announcement in San José Chiapa. The high-end immigration is only set to continue, as Mercedes-Benz and Jaguar-Land Rover have both announced plans to set up manufacturing operations there.

Mercedes is the big news here, as its new facility will see the German manufacturer invest 170-million euros for production of its next-generation C-Class and upcoming GLA-Class. "Brazil is an important future market. With our local production we accept the challenge and take on the competition," noted Andreas Renschler, Management Board member for Production and Procurement at Mercedes-Benz Cars and Mercedes-Benz Vans. Production is expected to begin by 2016.

Jaguar-Land Rover, meanwhile, isn't so concrete in its plans. The news of its investment in South America comes from a job posting for a plant quality manager in Brazil that was picked up by the UK's AutoCar. "Portuguese language skills will be definite advantage" for interested candidates, according to the job listing. The want ad follows on the heels of remarks by Jaguar Land Rover's Dr. Ralph Speth, who said there are "very intensive discussions" with Brazil's government. Unlike Mercedes, there's no mention of which vehicles will be produced in South America, although AutoCar thinks the Freelander, sold in the US as the LR2, is a leading contender.

Take a look below for the official press release from Toyota.

Local production capacities in Brazil for next-generation C-Class and GLA
Contribution to Mercedes-Benz 2020 growth strategy
Start of Production as early as 2016
Investment of around EUR 170 million
Andreas Renschler: "Brazil is an important future market. With our local production we accept the challenge and take on the competition."

Daimler expands in Brazil by adding a new facility to the global passenger car production network of Mercedes-Benz Cars. In the future, the next-generation C-Class and the GLA will be produced for the local market in a new assembly plant in Iracemápolis near São Paulo. Brazilian president Dilma Rousseff jointly signed the framework contract with Andreas Renschler, Management Board member for Production and Procurement at Mercedes-Benz Cars and Mercedes-Benz Vans, and Philipp Schiemer, CEO Mercedes-Benz do Brasil & Daimler Latin America, today. According to the current planning, the first vehicles will roll off the line as early as 2016. An investment of around EUR 170 million has been earmarked for expansion planned in the first stage.

Andreas Renschler: "Brazil is an important future market. With our local production we accept the challenge and take on the competition. The new facility stands exemplarily for the expansion of our global production network – we thereby approach our customers even more." Regarding the strategic importance of the future local production program, Renschler also said: "With the next generation of the C-Class and the GLA, we will be localizing two highly attractive products with top Mercedes quality, for which we see great potential in the Brazilian premium segment."
"With the local production of cars, Mercedes-Benz stands out as the only company to act in all segments of mobility in Brazil, with cars, trucks, buses and vans", said Philipp Schiemer, CEO Mercedes-Benz do Brasil. "The proximity of our production footprint in São Paulo and Minas Gerais will also allow us to have a greater integration among plants and exchange possibilities for the employees."

The foreseen production in the assembly plant should reach up to 20.000 vehicles each year. Around 1.000 new jobs will be created in the new facility. Furthermore, this should develop approximately 3.000 new jobs for suppliers. Daimler's country company Mercedes-Benz do Brasil will soon complete the purchase of land for the future plant premises in Iracemápolis near São Paulo, allowing for the start of the building preparations.

About the global Mercedes-Benz production network

The global production network of Mercedes-Benz Cars includes the German plants in Sindelfingen, Bremen and Rastatt, the Hungarian plant in Kecskemét, the US plant in Tuscaloosa, Alabama, the South African plant in East London and the BBAC (Beijing Benz Automotive Corporation, a joint venture between Daimler and BAIC) production facility in Beijing, China as the main vehicle production facilities. There are also CKD and SKD assembly plants in Egypt, India, Indonesia, Malaysia, Thailand and Vietnam. At all locations, the consistently high quality of every customer vehicle is safeguarded by the global standards of the Mercedes-Benz Production System (MPS).

In addition, there are the locations of the powertrain production network, which include the Untertürkheim Mercedes-Benz plant (the central location in Germany) as well the plants in Berlin and Hamburg, and the subsidiary MDC Power in Kölleda. The international locations include the Romanian subsidiary Star Transmission, and from this year a new engine plant at the BBAC joint venture in Beijing. From 2014, Daimler and Nissan will also start the joint production of four-cylinder gasoline engines based on a Mercedes-Benz design at the Nissan plant in Decherd, Tennessee.

About Mercedes-Benz do Brasil

Daimler is represented in Brazil by its country company Mercedes-Benz do Brasil Ltda., which has operations in the Mercedes-Benz Cars, Daimler Trucks, Daimler Buses and Daimler Financial Services divisions. Daimler AG's plant in São Bernardo do Campo is the largest outside Germany and the only one, in which trucks, bus chassis and assemblies such as engines, transmissions, axles and truck cabs are produced at the same location. Another location is the former passenger car plant at Juiz de Fora, which was also incorporated into the Mercedes-Benz global commercial vehicle production network in 2010 and has been producing the Mercedes-Benz Actros and Accelo light-duty truck for the Latin American market since 2012. Long-standing experience with local production, Mercedes-Benz do Brasil's very good network and its strong position on the Brazilian commercial vehicles market were significant factors in the current decision for the location of the new passenger car assembly plant.