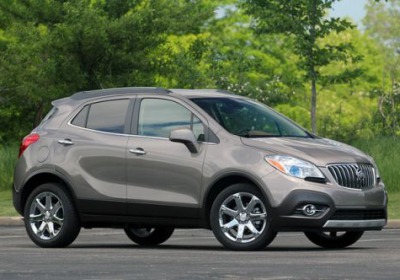 If there are any lingering doubts why General Motors held onto Buick while killing Pontiac, Hummer and Saturn, one only has to look at the sales numbers from 2013 for the real answer. Thanks largely to strong sales in China, Buick set a global sales record last year by selling more than one million vehicles.

The lion's share of Buick sales came from China, which sold more than 809,000 units – about four times more Buicks than were sold in North America as a whole. In the US, the Buick Encore accounted for almost half of all US sales with 97,311 units as Buick spent the summer trying to keep up with demand of the subcompact crossover. Likewise, China-only models like the GL8 minivan and Excelle sedan (same as the US-spec Verano) were strong sellers in that market.

For good measure, Buick more than doubled its sales in Mexico with 2,319 units. Scroll down for the full press release.

Strong growth in both China and North America accounted for the record-breaking year, with global sales up 15.4 percent over 2012. China posted a 15.7 percent sales gain, while the U.S. delivered a 13.9 percent sales increase. Canada also saw strong sales growth, with a 9.5 increase over 2012. In the U.S., 42 percent of Buick buyers were new to the brand and to General Motors.

Buick experienced strong global growth in both crossovers and sedans from a product lineup that is among the freshest in the industry and the strongest the brand has ever featured.

In the sedan segment, the China-exclusive compact Excelle again dominated in the compact sedan segment, delivering 6.9 percent sales growth. The Excelle GT and Verano compact sedans combined globally to deliver a 16.3 percent gain, while sales of the Excelle XT hatchback, sold only in China, were up 17.5 percent.

See also: GM recalling 1.5M cars in China for faulty bracket, eBay Find of the Day: 1981 DeLorean with 570-hp twin-turbo Buick V6 [w/videos], Watch this phantom Buick drive itself down the highway in a snow storm.