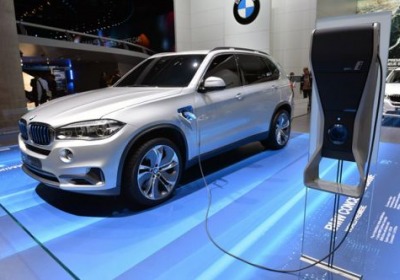 Bridging the gap between internal combustion engine-powered vehicles and electric vehicles are plug-in hybrids, and BMW has made one out of its biggest sports utility vehicle, even if it's just a concept car at this point. The plug-in hybrid X5 eDrive Concept debuted today at the Frankfurt Motor Show, and it sits attached to a charge port on the show floor.

As we reported in August, the X5 eDrive Concept combines a turbocharged four-cylinder engine of unknown output with a 95-horsepower electric motor, to achieve longer range and lower emissions. The X5 eDrive can drive up to 75 miles per hour and 19 miles on electric power alone, manage about 62 miles per gallon (3.8 liters per 100 kilometers) and accelerate from 0-62 mph in under seven seconds, according to BMW.

Three drive modes are offered: one that automatically operates the hybrid system, an all-electric mode and a Save Battery mode that operates the vehicle using the engine only.

While the SUV remains a concept, we wouldn't be surprised if it went into production within a couple years. Take a look at the press release we included below, and head on over to the live gallery.

Munich. The new BMW X5 raises efficiency to another new level in the world of the luxurious Sports Activity Vehicle (SAV). BMW is using the 2013 Frankfurt International Motor Show (IAA) to present the logical next step towards landmark efficiency in the SAV segment. The BMW Concept X5 eDrive combines the brand of driving pleasure for which the xDrive intelligent all-wheel-drive system is renowned and a luxurious ambience within the variable-use interior with a plug-in hybrid drive concept. Its innovative BMW eDrive technology guarantees the hallmark sporting ability of a BMW, while at the same time opening the door to speeds of up to 120 km/h (75 mph), a maximum range of 30 kilometres (19 miles) on electric power alone and average fuel consumption in the EU test cycle of 3.8 litres per 100 kilometres (74.3 mpg imp).

The concept study's BMW eDrive system consists of a four-cylinder combustion engine with BMW TwinPower Turbo technology and an electric motor which is also the work of the BMW Group. The 70 kW/95 hp motor sources its energy from a high-voltage lithium-ion battery. It can be charged from any domestic power socket and has sufficient capacity to enable the car to travel up to 30 kilometres (19 miles) solely on electric power, generating zero local emissions in the process. The high-voltage battery developed for the BMW Concept X5 eDrive is mounted in a particularly crash-safe position underneath the load area, whose capacity remains virtually unchanged as a result. There is a choice of three driving modes, depending on requirements and situation – the intelligent hybrid drive option for an optimum balance between sportiness and efficiency; pure electric and therefore emission-free driving; or Save Battery mode to maintain the current battery charge.

The groundbreaking character of the BMW Concept X5 eDrive is highlighted by understated but precisely arranged design accents. For example, the kidney grille slats, air intake bars and the inlay in the rear bumper – all in the BMW i Blue colour developed for the BMW i brand – present an appealing contrast to the Silverflake metallic exterior paintwork. The BMW Concept X5 eDrive also comes with specially designed roof rails, a connector for the charging cable that lights up during charging, and 21-inch light-alloy wheels in an exclusive, aerodynamically optimised design.

BMW eDrive in a Sports Activity Vehicle: intelligent hybrid technology delivers outstanding efficiency and characteristic driving pleasure.
Electrification of the powertrain allows BMW to unlock impressive potential for reducing fuel consumption and emissions. The BMW eDrive technology developed by the BMW Group to this end comes in various forms, each tailored precisely to the vehicle concept at hand. The BMW Group's first purely electrically powered vehicle to go into series production – the BMW i3 – celebrates its world premiere at the IAA 2013. And taking to the stage alongside the i3 will be the BMW Concept X5 eDrive, which follows in the tyre tracks of the BMW Concept Active Tourer unveiled in 2012 as the second plug-in hybrid vehicle to feature BMW eDrive.

BMW eDrive technology hooks up with the intelligent all-wheel-drive system BMW xDrive for the first time in the BMW Concept X5 eDrive. The new study vehicle offers superior driving characteristics underpinned by the electronically controlled and fully variable distribution of drive between its front and rear wheels. Regardless of the driving mode selected, the power generated by the electric motor, combustion engine or the two units together is channelled quickly and precisely to the wheels where it can be converted most effectively into propulsion. This allows the BMW Concept X5 eDrive to demonstrate the typical qualities of an SAV – assured traction and optimised stability in all weather and road conditions, coupled with increased agility through dynamically taken corners – in outstandingly efficient fashion. The versatile and sporty driving attributes of the BMW Concept X5 eDrive are complemented by average fuel consumption in the EU test cycle of 3.8 litres per 100 kilometres (74.3 mpg imp) and CO2 emissions of under 90 grams per kilometre.

The electric motor in the BMW Concept X5 eDrive generates maximum output of 70 kW/95 hp and – thanks to impressive torque available from the word go – demonstrates the instantaneous power delivery that has become a hallmark of electric drive systems. All of which elevates driving pleasure and efficiency to another level. The synchronous electric motor developed by the BMW Group also maintains a steady flow of power into the upper reaches of its load range and keeps weight low. The motor alone can propel the BMW Concept X5 eDrive to a top speed of 120 km/h (75 mph). As part of the boost function, it can also be used to give the combustion engine a noticeable hit of extra energy during acceleration and during dynamic mid-range sprints. The BMW Concept X5 eDrive can complete the sprint from rest to 100 km/h (62 mph) in under 7.0 seconds.

ECO PRO mode and all-electric driving: efficiency on demand.
Like members of the current series-produced BMW line-up, the BMW Concept X5 eDrive also offers ECO PRO mode, which is activated using the Driving Experience Control switch and encourages a particularly efficient driving style. This default mode is engaged when the car is started and offers intelligent hybrid functionality, whereby the energy management system tailors the interplay of combustion engine and electric drive system to most efficient effect. Drivers can also enjoy the services of the hybrid-specific Proactive Driving Assistant, which teams up with the navigation system to incorporate factors such as route profile, speed restrictions and the traffic situation into the driving mode selection.

Drivers can also switch to the all-electric driving mode. With the battery fully charged, the car can cover up to 30 kilometres (19 miles) on electric power alone and therefore with zero local emissions. Another option is the Save Battery mode, which allows the battery's energy capacity to be maintained – for example, if the driver wants to cover the final stretch of a longer journey through town on purely electric power.

Everyday usability: flexible charging scenarios and viability.
In order to allow the extra efficiency of its electric powertrain to be utilised as widely as possible, the BMW Concept X5 eDrive is designed as a plug-in hybrid vehicle. Its high-voltage battery can be recharged from any domestic power socket, a Wallbox designed to offer stronger currents or a public charging station. The impressive degree of flexibility drivers can look forward to when choosing a charging point is enhanced by the charging cable stored in the load area below the flat storage compartment. The battery unit is located a level lower still, which means the car's overall load-carrying capacity is only slightly reduced. The boot offers space for two large suitcases or four 46-inch golf bags, and the SAV's high level of variability – thanks in part to its 40 : 20 : 40 split/folding rear seat backrest – is retained, as are the generous levels of space and comfort over long journeys that it offers in all five seats.

Intelligent connectivity for greater efficiency.
Innovative functions from BMW ConnectedDrive help drivers to maximise the number of journeys they complete on electric power alone. For example, in the BMW Concept X5 eDrive, the electric range available is shown as a numerical value. The car's dynamic range display uses intelligent connectivity to keep a constant eye on all the factors affecting range, such as traffic conditions, route profile and driving style.

When the route guidance function is activated, the location of public charging stations is added to the points of interest shown on the navigation map. Drivers can call up stations located along their route or at their destination, and the system also tells them how much charging time is required to fully top up the battery once again.

All information concerning battery charge and electric range can also be viewed on the driver's Smartphone. A Remote app from BMW ConnectedDrive developed specially to meet the requirements of electric mobility enables owners to control the charging process from their phone. It also allows the vehicle to be pre-programmed while it is connected to an electricity source. For example, the heating and climate control system can be activated remotely to ensure a pleasant temperature inside the car before the driver sets off.