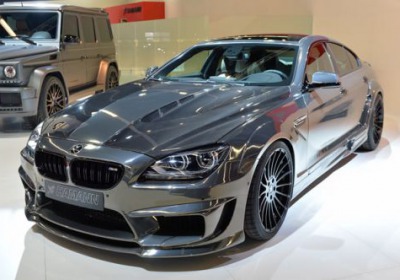 Oh, Hamann. After rolling out the ridiculously pink Mystère at this year's Geneva Motor Show, the tuning company has worked its mirror-finishing magic on the BMW M6 Gran Coupe, debuting this, the aptly named "Mirror" at the Frankfurt Motor Show. It sure is shiny, and a full 40 millimeters wider than the standard M6 GC.

Hamann says that the, um, "tailor-made suit" exterior treatment is made up of a new front bumper spoiler with large air intakes, side skirts, a new rear spoiler, and wing extensions out back. And the end result is... well, let's just call it noticeable. The special BMW rides on unique 21-inch wheels and sits a full 25 millimeters closer to the ground, as well.

As far as we can tell, Hamann hasn't upgraded the M6's 4.4-liter twin-turbo V8 at all, though there's a new sport exhaust system that "depending on the application area, either noisily announce its presence or purr sportily." Sounds like it's as loud as its newfound appearance.

Have a look below for Hamann's own words on this creation, and see it for yourself in the high-res gallery above.

Gran Coupé now even larger:
HAMANN widens the M6 into the "MIRROR GC"

HAMANN has already shown how exciting racing can be for the road at this year's Geneva Motor Show. In keeping with the then world premier of the refined BMW M6, the specialists with motor sport in their genes showed the BMW M6 Gran Coupé transformed into the "MIRROR" to the world for the first time at the IAA International Motor Show in Frankfurt.

Trademark of the large four-door car with the Coupé lines (F06 type) is the Widebody, which the factory in Laupheim, Germany precisely confers on the large car from BMW. The four part tailor-made suit consists of the front bumper spoiler with large air intakes, new front wings, side skirts, the wing extensions at the rear, the rear spoiler and the three-part centre rear panel and the rear wing. In addition HAMANN has treated the BMW to a bonnet completely made from black carbon as well as a rear spoiler for additional downforce at high speeds. The MIRROR does not carry the Widebody name without reason: the body has gained an impressive 40 millimetres in width.

Just as visually and functionally well-engineered as this new body are the light-alloy wheels. Among their customers HAMANN have long been known for their large selection of wheels. So the sports equipment supplier also offers a multitude of different sizes, designs and colours for the BMW M6 Gran Coupé. An example is the ultra-lightweight forged rim UNIQUE FORGED FORMULA with the nine-spoke Y- design and the central locking mechanism which on the M6 is mounted in the dimensions of 9x21 inches at the front and 11x21 inches on the rear axle and which, thanks to the four progressive sport springs and around 25 millimetres depth is fitted even more closely between asphalt and vehicle. HAMANN delivers this variant as a complete wheel with ultra-high performance Vredestein Ultrac Vorti R tyres from their technology partner Vredestein in the sizes of 265/30 and 305/25.

The combination of stimulating appearance and performance is also found in the sports exhaust system. The exhaust muffler with the four black anodized tail pipes thanks to its reduced back pressure ensures sophisticated dissipation of the exhaust gases in all engine speed ranges and can, depending on the application area, either noisily announce its presence or purr sportily.

HAMANN has strikingly fitted out the interior in a sporty manner. Pedals made of aluminium along with footrests, as well as the floormat set with the company emblem, set main accents without distracting too much from the large transformation outside.