Audi gets into tablet market with Android-powered Smart Display 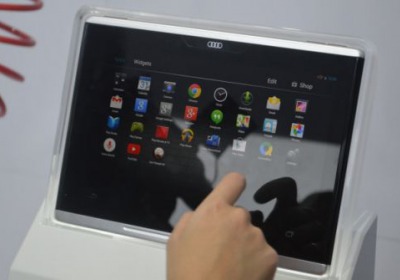 Audi has partnered with Google for its in-car computing software for years now, so it's hardly surprising to hear that its first foray into the world of tablets runs a Google OS (which one is still unclear), and has Android guts. Sorry, iPad users. The 10.2-inch tablet wears a lovely aluminum chassis that seems right in line with Audi's typical industrial design, and is packed with Nvidia's Tegra T40 processor.

Smart Display is meant to highlight the upcoming cleverness of Audi's newly announced in-car LTE connectivity (by way of continued partnership with AT&T). Users can, in theory, access the Google Play store while on the go, and then download and fiddle with Android-based apps until their very hearts are content. By "users" we mean "passengers" here, and so does Audi, though we're not exactly sure if there are measures in place to keep a driver from tableting while driving.

We don't know when, where, or in concert with which vehicle(s) the company will first offer Smart Display for sale. It could very well be part of an advanced options package, or even sold à la carte to Audi fans everywhere.

Audi Smart Display
Audi once again breaks new ground in the infotainment sphere with the Audi Smart Display. Comparable to a portable computer system, the 10.2-inch Smart Display is compact, yet high-resolution. An active, fast computer, it opens up entirely new dimensions in its role as a mobile in-car entertainment system.

From DVD and TV streaming to remote access in the car to multimedia content, and from control of the radio to route planning for the navigation system, the Audi Smart Display combines practicality and entertainment in one device, both inside and outside the vehicle.

The Smart Display is connected to the car via a WLAN link to the MMI navigation plus with Audi connect. Radio and media, navigation and even car data can then be shown on the device's touch display.

The unit's internal storage serves as an audio and video jukebox, but the Audi Smart Display can also receive video from the MMI navigation plus. One practical feature: A film that could not be watched to the end in the car because the destination had been reached, for example, can be resumed back home in the living room at the exact point where it left off.

The Smart Display uses the Audi sound system to play back sound in perfect quality. External headphones can also be connected via Bluetooth or a standard headphone jack. The Smart Display also supports NFC (near field communication) technology, making it particularly easy to connect to Bluetooth headphones and mobile devices in general.

But the Audi Smart Display has even more to offer. Thanks to the WLAN connection, clicking on the "more" button in the start menu establishes an Internet connection with UMTS or LTE speeds via Audi connect.

The full functionality of the Android operating system is available. Google Play, the Android app store, provides access to more than 950,000 apps and games as well as movies, music, audio books and eBooks. The integrated camera in the Smart Display can be used for Skype video calls, and the QuickOffice app keeps users productive while on the road.

The Audi Smart Display was systematically developed for use in cars. It can easily withstand high and very low temperatures, its robust hardware makes it crash-proof, and its brushed aluminum chassis visualizes the device's premium character. All computing operations are extremely fast thanks to the new Tegra 4 processor from Nvidia, the heart of the device.