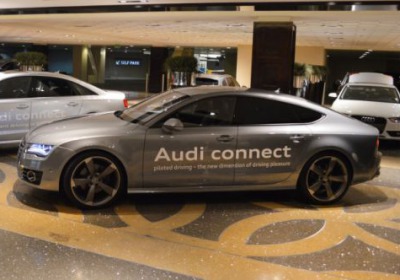 The closer automotive technology comes to making good on the promise of fully driverless vehicles, the better we see just what difficult work reaching that ultimate goal will become. That's because, unlike so many other in-car technologies that need only integration into a vehicle, truly autonomous cars will also insist on involvement with the surrounding environment, fellow motorists, infrastructure in cities and other communities and making it all work without exposing automakers to law-breaking or tremendous possible litigation. Clearly that isn't all about to happen in one go.

At CES in 2012, Audi told us about a debuting technology that would mark a significant step along the path towards self-driving cars: Traffic Jam Assistant. This year, the German automaker invited us out to Las Vegas to see the jam-busting technology in action, on a relatively busy freeway.

The Traffic Jam Assistant (we're pretty sure that name is still in Beta) promises to relieve drivers from the tedium of slow-moving freeways by taking care of braking, acceleration and staying inside of the lane – all with no input from the human behind the wheel. While still a fair step from truly autonomous driving, the goal here is to give a commuter some respite from the mechanical, time-wasting traffic jam paradigm, potentially opening up a space for productivity in the process. (Audi can't come right out and say that TJA will allow you to use your cell phone in traffic, as that's still against the law in many places, but something like that is clearly on the radar... er... LiDAR.)

The system makes use of the combined efforts of an ultrasound sensor (borrowed from Audi's current parking assist tech), a series of cameras both outside and inside the vehicle and the aforementioned LiDAR scanner nestled in the bottom center of the front grille. The brain of the operation is a very compact CPU housed in a side panel in the trunk.

Enriched with environmental data from that impressive suite of sensors, the Assistant's 'brain' is ready to take the helm at speeds from 0 to 40 miles per hour, with just the touch of a steering wheel mounted button. When the car senses the conditions are sufficiently traffic jamy (correct speed, no pedestrians detected, etc), it alerts the driver that the TJA is available via the central display. Once activated, the speedometer and tachometer are replaced with a screen showing basic car information (gear and speed right now), as well as a sort of map of what the scanner 'sees' in the lanes around your car. Audi tells us that this display is far from a finished product, but we thought it looked rather nifty, anyway.


One thing Audi is not interested in having its newly assisted drivers do, is fall asleep.

One thing Audi is not interested in having its newly assisted drivers do is fall asleep. Again, the company isn't calling this a self-driving car, rather referring to the system as a form of "piloted driving." That means serious inattention like reading a newspaper or taking a snooze is out of the question. Two interior-mounted cameras face the driver and analyze eye movement; when those cameras sense that ones eyes have been closed for approximately ten seconds, they'll alert the system to bring the car to a halt, turn the hazard lights on and alert local authorities. Audi tells us that law enforcement groups it has spoken with like this feature, too, as it should improve response time for emergency in-car medical situations (having a heart attack while driving, for instance).

Installed on a mostly stock-looking A7 – autonomous driving laws in Nevada necessitate the second 'driver' workstation you see in the rear seat – Traffic Jam Assistant worked without a hitch in our demonstration run. But, unfortunately, we can't report yet that it'll be coming to market at a certain time. Legal restrictions may still need to be resolved on a market-to-market basis before the tech hits the showroom floor, while Audi is also still working at perfecting every bit of the driverless driving experience. The promise we saw makes us hope both are resolved sooner, rather than later.

Take a look below for a short video of Traffic Jam Assistant in action in Vegas, and let us know what you think about its production potential in the Comments.