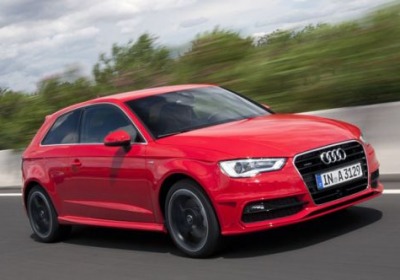 About a month after Volkswagen celebrated building its 30-millionth example of the Golf, Audi has announced that it has produced three million versions of its small hatchback, the closely related Audi A3. Probably more surprising than the fact that the A3 has moved in such big numbers since its global debut in 1996 is the fact that it has done so with relatively little support in the US, seeing marginal sales in the States since 2005.

The three-millionth A3 was a Sportback TDI model, but the lineup has grown this year to include a new sedan and S3 model, and the hybrid A3 E-tron is on the way. With these new models – especially the sedan in the US – we expect the A3 to continue to be a popular entrant in the premium small segment. Scroll down for Audi's official press release.

THE AUDI A3 – THREE MILLION CARS AND COUNTING

Audi A3 number three million – a Sportback 2.0 TDI quattro – left the production line in Ingolstadt, Germany this week
Pioneer of the premium compact hatchback class started life 17 years ago and is now in its third generation
Latest, all-new car is the first to be available in saloon form

17 years of enduring global appeal have just culminated in the production of the three-millionth Audi A3, the car which in 1996 stole a march on the German prestige 'establishment' by spearheading the creation of the now flourishing premium compact class. Car number three million is a 2.0 TDI quattro version in five-door Sportback form, one of three attractive body styles currently available in the all-new, third generation A3 range, which for the first time also includes a four-door saloon option. More variants are set to follow.

"Three million automobiles in the compact class is quite a performance," said Dr. Frank Dreves, Board of Management Member for Production at AUDI AG. "This success is backed by a strong team and an efficient production system. With the Audi A3, we have created a new brand segment – we have been setting standards in the compact class with innovative technology and first-class quality for 17 years now."

In 2012, Audi produced a total of 152,993 A3 series cars at its plant in Ingolstadt, Germany. This total included A3 and A3 Sportback models, as well as S derivatives. The new Audi A3 Sportback, launched in 2013, has accounted for the highest proportion of this production volume: Each day, about 700 examples of this immensely popular variant roll off the assembly line.

Approximately 913,000 examples of the first Audi A3 were sold. That worldwide success continued with the second generation (2003-2013), which underscored the Vorsprung durch Technik brand's domination of this segment in terms of technology and quality. Nearly two million of these second generation cars were delivered to customers.

In late 2012, the completely new third generation car made its debut, and again set new benchmarks for quality, build integrity and technological sophistication at this level. Last month, the new A3 Saloon joined the three-door and Sportback variants, and later this year the new 300PS S3 and S3 Sportback will make their UK debuts, followed in early 2014 by the S3 Saloon.

All three A3 ranges offer a choice of exceptionally efficient, highly refined engines, including the 1.4 TFSI with Cylinder-on-Demand technology and 60.1mpg potential and the 1.6 TDI which pares CO2 output back to 99g/km. They combine these with fit, finish and equipment worthy of an executive class car, and also offer the opportunity to upgrade with sophisticated options such as Audi magnetic ride damper control, a 'hands-free' parking assistant, swivelling adaptive cornering lights, a 705-watt Bang & Olufsen audio system, MMI touch fingertip data entry and Audi connect, bringing internet-based services to the car. In the near future, high-tech all-LED headlights will also be added to this list as an alternative to the more familiar xenon units.

See also: 2014 Audi RS7 [w/video], Highlights from the Goodwood Festival of Speed, including the McLaren P1 and a Ford Transit running the hill, BMW expects China to pass US as its top market in 2013.