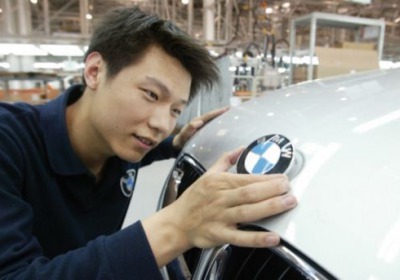 When you combine two billion citizens, 100 cities with more than a million inhabitants and an economy that's as unrestrained as Jim Cramer on an Adderall binge, China's explosive auto industry growth shouldn't be a huge surprise. Audi already lists the communist country as its largest market, while Mercedes-Benz is expecting it to be there in the next few years. Now, according to a report from Automotive News, BMW is expecting the People's Republic to overtake the United States in sales by the end of 2013.

We already discovered the extent that BMW is going to in establishing a dedicated Chinese stronghold, when we explored BMW's Shanghai-based DesignWorks studio ahead of April's Shanghai Motor Show. And while we argued that DesignWorks Shanghai hasn't really borne fruit, it isn't due to a lack of sales.

BMW China has seen a 16-percent jump in year-over-year sales, lead by a 28-percent gain in 5 Series sales. Part of BMW's growth strategy comes from an ever-expanding dealership network. Remember those 100 cities we mentioned with over one million people? According to Karsten Engel, CEO of BMW's Chinese operations, those 100-million-plus city dwellers don't have access to a premium dealership.

Despite BMW's successes in the Chinese market, it's still playing second fiddle to Audi. Its rival had the highest market share in the premium market in 2012, and it's seen an 18-percent increase to BMW's 16-percent increase, moving 228,000 vehicles to BMW's 170,000.