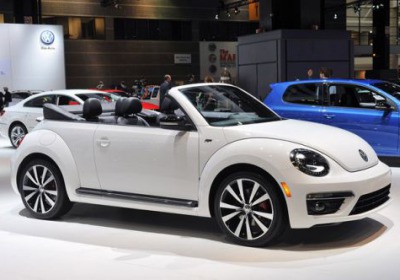 Volkswagen just launched the topless Beetle Convertible at the Los Angeles Auto Show in November, but we're already seeing the next step forward in the topless Bug range with this, the R-Line. We'll admit, this treatment falls under the "all show and no go" category, but it's still a pretty potent little cutie.

The R-Line starts with a standard Beetle Turbo Convertible but adds unique 19-inch aluminum wheels on lower-profile tires, LED daytime running lamps and Xenon headlamps. Naturally, there are R-Line badges aplenty both on the interior and exterior, and we must say, the whole package looks pretty darn snazzy.

Pricing has yet to be announced, but when it goes on sale later this year, the hotter convertible will join Volkswagen's growing R-Line portfolio that now includes the CC, Beetle hatch, Tiguan and Touareg.

- Joins the CC, Tiguan, Touareg, and the Beetle coupe as the fifth car in the R-Line family

Herndon, VA / Chicago, - Volkswagen of America, Inc. announced today at the 2013 Chicago Auto Show that it will offer the R-Line trim on another model for the U.S. market. Joining the CC R-Line, Beetle R-Line coupe, and the recently introduced Tiguan R-Line and Touareg R-Line, the Beetle Convertible R-Line will be added to the Volkswagen line-up for model year 2014.