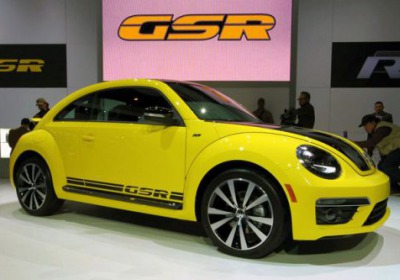 VW is bringing its sporty black and yellow Beetle back for 2014, and you can see live photos of it above. It's got a 210-horsepower turbocharged 2.0-liter four-cylinder engine under the hood (that'd be the hood up front, unlike the car's forebear), and a six-speed manual or DSG automatic transmission sends those ponies to the front wheels. Note that this car's output is up 10 horses on other turbo VWs, and the Jetta GLI and Beetle Turbo for 2013. The 0-60 run takes 6.6 seconds, and top speed is limited to 130 miles per hour.

Besides the in-your-face black and yellow paint, the GSR is outfitted with a large rear spoiler and 19-inch wheels shod with 235/40 tires. The bee-like hue carries over inside, with yellow stitching on black leather. Only 3,500 will be produced, each with its own unique plaque. Pricing has not yet been announced, but you're free to read through the press release below all the same.