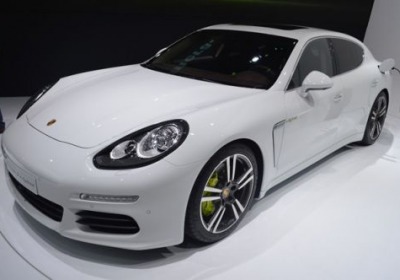 The entire Porsche Panamera lineup gets a refresh for the 2014 model year, and new additions to the range include two long-wheelbase models and this E-Hybrid fuel-sipper that makes its debut here at the Shanghai Motor Show. And, well, we say "fuel-sipper lightly."

Porsche has packed its hybrid Panamera with 416 horsepower and 435 pound-feet of torque, and that certainly makes for one quick sedan-hatchback-thing. Hitting 60 miles per hour will reportedly take just 5.2 seconds, on its way to a top speed of 167 mph. And while Porsche hasn't revealed specific powertrain details, the company says that the S E-Hybrid "improves upon the concept offered by the previous Panamera S Hybrid with a more powerful electric motor," which leads us to believe that the supercharged 3.0-liter V6 engine at the heart of it all still remains intact.

Fuel economy numbers (or estimates) have not been released as of this writing, but we expect to have that information closer to the car's on-sale date later this year. As for the new battery system, Porsche says that when plugged into a 240-volt charging station, it can be fully charged in just two and a half hours. When topped off, the Panamera S E-Hybrid should have an electric driving range of around 20 miles at speeds up to 84 mph, though, obviously, not at the same time.

Have a look at the press release below for more information.


Shanghai/Atlanta. Today Porsche is celebrating the world premiere of the 2014 Panamera at Auto Shanghai, the Asian market's leading auto show. The centerpiece of the show for Porsche is the appearance of the new Panamera S E-Hybrid, the first plug-in hybrid offering from the German automaker. Also making their debut are two luxurious Executive versions for the Panamera S and Panamera 4S, which feature an extended wheelbase and a completely new 3.0-liter twin-turbo V6 engine. With this launch, the Panamera line-up now increases to nine individual models that offer an extended range between sportiness and comfort.

"The Porsche Panamera and China – that is a very special success story," said Matthias Müller, president and CEO of Porsche AG. "Exactly four years ago, we introduced the first Panamera to a world audience here in Shanghai – and very intentionally here. Because it was clear to us that our Gran Turismo would be precisely the right model for this future market. And we were not mistaken. In 2012, one out of three Panamera cars were delivered to China."

Since then, China has gained in importance and become the second largest Porsche market in the world, behind the United States.

The Panamera S E-hybrid is capable of accelerating from a standstill to 60 mph in 5.2 seconds on its way to a top track speed of 167 mph.


*Base pricing does not include options, taxes, dealer charges and a destination fee of $975.