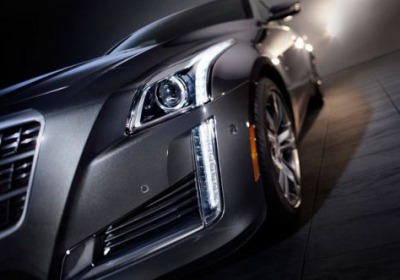 The redesigned 2014 Cadillac CTS will be unveiled this Tuesday on the eve of the New York Auto Show, but as often happens, some images of the car have leaked onto the web a few days early. Previously, the only information we had on the 2014 CTS concerned the all-new twin-turbo V6 engine that will be found underhood, rated at 420 horsepower and 430 pound-feet of torque.

While none show the new car in its entirety, the images do show much of the front end, particularly the headlights that feature vertical bars of LEDs that start down low as foglights and continue up to the top of the front fenders. They're similar to the lighting design first shown on the XTS and ATS, except the lower portions are much taller.

There are also views of the rear end and one of the taillights, as well as an interior shot of the front passenger door. The latter image has us most intrigued, as it shows some very high end materials being used in the new CTS interior. The low-gloss wood trim, in particular, looks very premium.