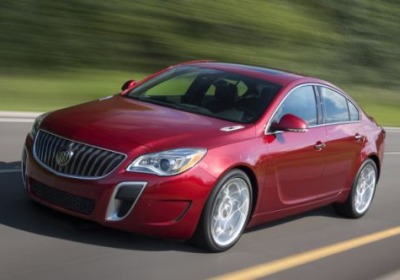 A few months ago I drove the 2014 Buick LaCrosse and wrote up a First Drive review of it. For all of my quibbles with that sedan (and I had a fair number), I understand that it speaks to the heart of what new Buick loyalists like in a car; it's roomy, has a cushy ride and is as placid as a summer's morning at highway speeds.

Those qualities, while undeniably desirable, don't mean a whole lot to me personally. I prefer sedans that conjure up words like "nimble," "punchy" or even "raucous" on occasion. So, directionally, the high-performance GS version of the 2014 Buick Regal is more my cup of tea than any other car in the company's current range.

In fact, I'd already come to know the Regal GS from its 2012 model year introduction, and grown more than a little fond of the sporting sedan in its original front-wheel-drive, six-speed-manual guise. The fast, sweet-handling car with well-sorted controls may have suffered from a slight identity crisis in terms of pricing (and may still), but it was undeniably fun to drive. So, when I heard that the GS was coming to market for 2014 with optional all-wheel drive (albeit only in combination with a six-speed automatic transmission), I was stoked to have another go and concentrated my driving impressions on the AWD car.

Please bear in mind that the "go" in question here happened over the course of a few hours, and totally within the confines of General Motors' own Milford Proving Grounds. The testing routes we drove (a miles-long section of ride and handling road course, followed by a huge autocross set in the middle of a massive skid pad) were excellent, but the rules of full disclosure necessitate letting you know we were on Buick's home court. Driving at the inner sanctum also explains why you're seeing stock photography here, instead of our standard original photo set – no cameras were allowed.