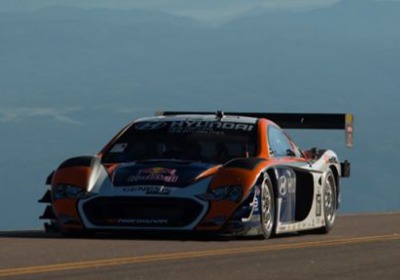 The fourth and final practice day of the 91st Pikes Peak International Hill Climb is complete. Tomorrow everyone will make any last-minute adjustments and get their cars, their bits and bobs lined up in the pits for Sunday morning's this-time-it-counts run.

The Unlimited runners took on the top section of the course today, Sébastien Loeb and his big-mouth Peugeot acing the practice test again with a time of 2:11. Rhys Millen's team proved its got the engine issues of two days ago in the Hyundai PM580T sorted out, posting the next-best time at 2:27.16. The reason we had to dip all the way into the hundredths for his time is because he nipped Romain Dumas by just .31 of them, the Frenchman in the Norma M20FC PP running the course in 2:27.47. In fourth came the Frenchman in the monster Mini, Jean-Philippe Dayraut six seconds back at 2:33.

Time Attack competitors, also on the upper section, were led by Paul Dallenbach in the Hyundai Genesis Coupe with a time of 2:36, Porsche pilot Jeff Zwart crossing the line six seconds later at 2:42, fellow Porsche driver David Donner coming in another six seconds back at 2:48. Dallenbach has topped three of the four practice-day sessions, sliding into the second spot behind Donner only on Practice Day 2.

Greg Tracy, the ex-Pikes Peak motorcycle champion who's been tearing it up in the Mitsubishi MiEV Evolution II, took the top time again today with a 2:25. He was followed by Nobuhiro "Monster" Tajima at 2:27, the second Mitsubishi driven by Hiroshi Masuoka at 2:30 and then Rod Millen in the Toyota, the senior Millen saying the team sacrificed ultimate speed for set-up work and a time of 2:32.

In the other classes that were also in the middle section, Clint Vahsholtz ran a 2:40 to lead from another pair separated by hundredths, Donner Billingsley at 2:45.54 and Andy Figueroa at 2:45.62. The Pikes Peak Open competitors were headed by Layne Schranz again with a 2:44, then Jeff MacPherson at 2:54 and James Robinson in the sole remaining Acura NSX at 2:58. Vintage drivers followed the lead of Ralf Christensson with a 2:59, then came Christopher Lennon at 3:08 and John "Jack" Rogers in a 1965 Ford Falcon at 3:09.

Tonight comes the Fan Fest, and we'll be looking for a chance to speak to some drivers and teams before the flag drops. Come back tomorrow when we'll have the news and rumors about this year's race including a chat with Rhys Millen, people's thoughts on Peugeot's entry, the hordes of media, Mitsubishi using the race as a testbed for developments for the next Lancer Evolution, video of some of the competitors during practice and the final running order for Sunday's race.