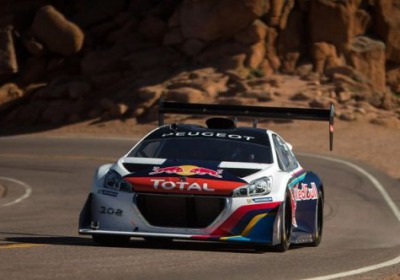 The third practice day of the 91st Pikes Peak International Hill Climb is done. While the other classes got running time on the middle and top sections of the course, qualifying times were set on the bottom section of the course for the Open, Open Wheel, Electric, Exhibition and Vintage classes.

Everyone managed to keep it on the black stuff today, Greg Tracy setting the fastest time ahead of Hiroshi Masuoka, both men driving the Mitsubishi MiEV Evolution II four-wheel-drive prototype. Not even half a second behind Masuoka came Nobuhiro "Monster" Tajima in his Monster Sport E-Runner, who has taken about 18 seconds off his time since the first practice day. Rod Millen was the fourth fastest on the day in his Toyota TMG EV POO2.

Topping the Open Wheel class was Clint Vahsholtz, followed by Donner Billingsley, Andy Figueroa and Rodney O'Maley. The only driver in that class not to be given a time today was Dan Novembre. Kenshiro Gushi took the Exhibition class today as his Lexus IS F CCS-R made it up the mountain in 4:27.248, followed by Sage Marie in the Honda CR-Z at 5:19.591. Simon Pagenaud and his Honda Odyssey weren't classified.

Layne Schranz nabbed the top time for Pikes Peak Open runners in his 1999 Chevrolet Monte Carlo, Randy Schranz behind him in his Shelby Cobra, Jeff MacPherson right behind in his Porsche 914-8. The old-timers in the Vintage division were lead by Christopher Lennon in a 1973 Porsche 911 RSR, Ralf Christensson two seconds behind him in a 1967 Ford Fastback GT350. The final times and running order will be released after tomorrow's qualifying, at about 5 pm Mountain time. As of now, five cars have dropped out – in some cases literally – of the original 69-car field, and 83 bikes remain of the 86 entrants.

Further up the mountain the Time Attack and Unlimited runners were practicing in the middle section of the course. Paul Dallenbach led the Time Attack field in Rhys Millen's Hyundai Genesis Coupe from last year with a time of 2:33, then came the two Porsches of Jeff Zwart at 2:38 and David Donner at 2:40

At the top of the field, the Sébastien Loeb again led the timesheets with a 2:12, and was again followed by Romain Dumas at 2:26. Third place went to Dayraut in the monster Mini at 2:29.

Rhys Millen hasn't got a mention yet because he didn't run today. His Hyundai PM580T had an engine problem last night and the team decided to put in a brand new motor. They only finished doing that this morning while the others were running, then spent the day testing at an oval/road course near Colorado Springs to make sure everything's good to go for tomorrow. He'll be back on the mountain tomorrow, and we'll be back with a report then.

Tomorrow's practice will have all of the bike divisions qualifying on the bottom of the course while the other classes get their settings dialed in for race day on Sunday. To watch or listen to the race live on Sunday, June 30, Red Bull TV will be streaming the entire event here, and you can listen on KRDO NewsRadio 105.5 FM and 1240 AM. If you insist on total coverage, feel free to follow the Pikes Peak Facebook and Twitter pages. For live timing and results, go here. If you lose all those links, just go to the Pikes Peak site and click the Follow Live tab at the top of the page. The live stream on Red Bull TV starts at 7 am Mountain time (6 am PST / 9 am EST), the green-flag party kicks off at 8 am Mountain Time.