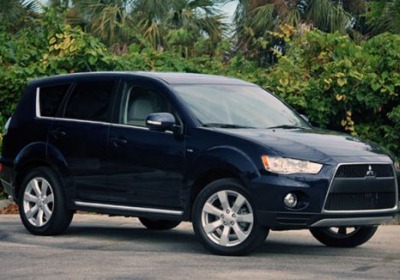 I'm not a gambling man, but if there were a pool for an automotive death watch, my money would be on Mitsubishi... Lincoln is a close second. To understand the plight of Mitsubishi, you only have to look at its current lineup; they all just look, feel and drive about 10 years older than they really are. With the departure of the Endeavor and merciful killing of the Eclipse (the Galant lives on, but is on hiatus for the 2013 model year), one of the worst remaining offenders is the Mitsubishi Outlander, which I recently drove in top-level GT trim for this Quick Spin.

If we had a time machine and took the 2013 Outlander GT back to 1998, it would be revolutionary. If we could take it back to 2004, it might be near the top of its class. But in the current highly competitive crossover segment of today, the Outlander just falls short. Yes, the all-new 2014 Outlander is on its way later this year, but from what we've seen both inside and out, the new design would look great in 2008. That being said, spending a week with any vehicle can point out surprising highs as well as lows, and there are still plenty of reasons to enjoy Mitsu's midsize CUV.