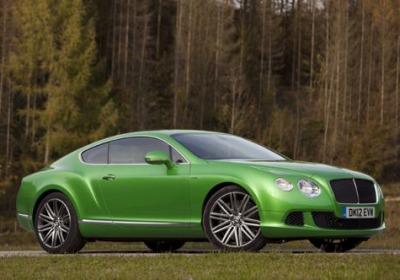 I'm travelling at the approximate speed of privilege. With the aluminum accelerator of the 2013 Bentley Continental GT Speed buried to its neck in the high-pile carpet of the floorboard, the 6.0-liter twin-turbocharged W12 underhood is at full boast. The 616 furious British horses pumping under that long, proud prow set the German countryside to frappé with breathless ease, and with the sprawling sheetmetal of the coupe settled comfortably onto its haunches in eager anticipation of ever more thrust, it's clear this machine is content to consume endless kilometers of Autobahn in wide-mouthed gulps. There's an open lane of unrestricted tarmac unraveling before me, and I'm keen to oblige every thread of temptation singing in my chest. The speedometer has just clicked past 165 mph.

At this clip, the new crown jewel of the Bentley war chest is covering land at the rate of nearly one football field per second. The white lines on the road are beginning to fade into a solid stream, and I'm suddenly aware of the increasingly rapid heartbeat whispering the truth of my mortality in my ears. There's no looking anywhere other than as far to the horizon as possible, but even with my eyes set to long-range scan, it's clear that if something goes wrong at this velocity, they'll be burying an empty box in the hills of Tennessee. That little bit of trivia makes it all the more disconcerting when an ambling Volkswagen Jetta strays into my lane for no other reason than to take in the glorious sight of me manufacturing a stack of bricks in the quilted-leather driver's seat of someone else's $228,600 supercar.

Save one very impressive underwater Lego fortress from my 11th Christmas, I have never wanted anything so badly as I want to bring this machine down from speed. I delve into the carbon silicon-carbide brakes on the 2013 Continental GT Speed with as much force as I dare, keenly aware of the dark hilarity that could ensue from introducing words like "panic," "stop" or "ABS" to this recipe. The nose of the big Bentley heads for the ground, but we're still closing the gap at an uncomfortable clip. The lub-dub in my ears ceases altogether, and I take a brief moment to hope my wife and her next husband spend my life insurance with the same gusto in which it was earned.

Despite our rapid deceleration, the Conti and I are still in imminent danger of punting that damn Jetta clear past the frosted tips of the Alps and straight into Mongolia, forcing me to cease my polite petitions for sensible speed and grab a foot-full of pedal. We are at threshold. My adrenal glands are humming the entire score of Wagner's Flight of the Valkyries at triple pace as the GT Speed wiggles its hips, claws at the concrete with physics-bending grip and settles in at 70 mph a solid 10 car lengths behind the Jetta of Doom. The driver calmly signals before wandering back to the right. At some point, I remember to resume breathing.

A top speed of 205 mph may seem impressive, but trust me when I say that feat isn't nearly as amazing as being able to capably deduct 95 mph from the speedometer on command. This is one hell of a machine.

It will take a keen eye to differentiate the 2013 Bentley Continental GT Speed from the rest of the Continental family. Subtle exterior tweaks like a new dark-mesh grille, 10-spoke 21-inch wheels and rifled exhaust outlets are just about all that set this machine apart from its more common kin outside. But the quiet changes betray substantial mechanical revisions beneath. It took Bentley three years to create the new Continental GT Speed with substantial tweaks to the machine's drivetrain, cooling system, aerodynamics, brakes and chassis. The result is the fastest production vehicle to ever wear the company's badge.

Indoors, buyers can expect to find new quilted door panels paired with drilled aluminum pedals, knurled shift lever trim and standard "engine sign" aluminum trim work. Our tester came with the optional carbon fiber veneer, and while the look befits the sportiest member of the Continental line, were it our money, we would prefer to see the company's superb wood trim work at play in the cabin. It takes Bentley's team of woodworkers 17-25 man hours to craft a matching set of wood veneer trim for Continental, and the finished product looks good enough to lick. Wood trim is a standard alternative to the aluminum gear.

The cockpit remains impressively quiet even well above the triple digit barrier.

Otherwise, the cabin remains the same sumptuous nest of the nouveau riche we've always known and loved. The full 9 to 10 matched bull hides are all in attendance from headliner to kick panel and everywhere in between, and the cockpit remains impressively quiet even well above the triple digit barrier.

While designers left the 2013 Bentley Continental GT Speed largely unmolested, the manufacturer's engineers allowed the twin-turbocharged 6.0-liter W12 engine no quarter. The company scrapped the mill's old engine management system for the new Bosch ME17 platform. Capable of dishing out up to 180 million calculations per second, this new tech allows the big grand tourer to more accurately manage the engine's fuel system, turbochargers and spark for optimum power and efficiency. The machine's full 590 pound-feet of torque piles on from just 2,000 rpm and plateaus all the way to just past 4,000 rpm, while the breadth of the 616 horsepower steps onto the dance floor at 6,000 rpm.

Of course, big power and big speed require serious cooling, which is why everything behind the front fascia has been restructured. At full bore, the new GT Speed shoves the equivalent air volume of a mid-sized conference room through its radiator every second, which allows the machine to achieve its full 205 mph top end at ambient air temperatures of up to 104 degrees Fahrenheit. With coolers for the transmission, differential and oil, the beast's nose is a busy slice of real estate.

Speaking of the transmission, Bentley turned to ZF to supply an eight-speed automatic transmission capable of ripping off shifts in the .1 second range. For comparison's sake, a traditional slusher can pull the same stunt in .4 seconds, while a dual-clutch unit can swap its cogs in around .2 seconds. Stick the shifter in manual mode, click through the awkwardly placed column-mounted paddles and the GT Speed will oblige with quicker-than-you-can-think swaps. Very impressive. More importantly, the box's logic allows the transmission to "block shift," or kick down up to five gears in a single step should engine and road speed allow. The result is a gearbox that's always ready to plant the full grunt of the big W12 on the machine's all-wheel-drive system.

The drivetrain can hustle the 5,115-pound 2013 GT Speed to 60 mph in a scant four seconds flat, and according to Bentley, the 100-mph barrier falls in nine seconds even. Each plunge of the accelerator is like beating Newton about the head and face with a sock full of pennies. Repeatedly.

If you aren't sitting agape at this vehicle's ludicrous sprint times, odds are you're still stuck on that curb weight figure. There's no escaping the fact that the new stud in the Bentley stable is a portly steed, but engineers managed to cut some 385 pounds from the standard Continental GT W12. That's thanks in part to the use of copious amounts of aluminum, including in the hood and trunk lid, though there are other tricks at play as well. The new 21-inch wheels, for example, are 15-percent lighter than any other 10-spoke on the company's option sheet while remaining 79-percent stiffer. Likewise, the optional $13,600 carbon ceramic brakes of our tester shed 20 kg pounds of unsprung weight over all four corners.

Engineers managed to cut some 385 pounds from the standard Continental GT W12.

Speaking of brakes, the 16.5-inch front carbon ceramic discs have the distinction of being the largest of their kind on any production vehicle in the world, and they're pressed by eight-piston calipers. Out back, the 13.1-inch carbon rotors get squeezed by four piston clamps. As standard equipment, the 2013 Continental GT Speed makes use of 15.9-inch cast iron rotors at the nose and 13.1-inch units in the tail.

Bentley also paid special attention to firming up the vehicle's suspension. The machine is now 45-percent stiffer up front and 33-percent firmer in the rear thanks to revised springs, dampers, bushings and a larger rear sway bar. In addition, the sporting Continental rides almost half an inch lower than the standard W12 model and the machine's continuous damping control automatically firms up the ride further as the speed increases.

That counts for quite a bit at velocities of over 130 mph. The GT Speed feels solid and poised, even as the speedometer reaches for the right side of the dash. A special hidden spoiler tucked just under the rear glass deploys at speeds over 90 mph to increase downforce, and Bentley claims the mini wing can deliver the equivalent of up to 275 pounds of weight to the rear axle at 205 mph. Likewise, a ZF steering rack delivers less and less assist as speeds increase, helping to give the GT Speed confident composure even as it threatens to vacuum lesser Volkswagen products through its grille.

The driveline is refined enough to wear the buttoned-down Bentley badge despite the high-strung powerplant on hand.

Dip off the autobahn and into a few winding Alpine passes, and the machine presents itself as remarkably poised for a creation of this girth. The driveline is refined enough to wear the buttoned-down Bentley badge despite the high-strung powerplant on hand. That changes with one slide of the shifter, however. Clicking the shifter back into its sport mode sharpens the driving experience markedly, offering readier downshifts, longer gear holds and firmer steering while simultaneously opening up the oval exhaust for all sorts of pops and crackles. There are drawbacks, however. Sport mode curses the GT Speed with hard shifts punctuated with the clack of driveline lash. The experience is at odds with the coupe's leather-swaddled cabin, though the result is easy enough to forgive while hammering from one apex to the next. Forget to slide the transmission back into its standard mode in a small town, however, and you'll be left wondering what sort of antics are going on under the car.

That qualm aside, it's hard not to find yourself swooning under the Continental GT Speed's spell. Bentley even claims the car is good for up to 20 miles per gallon on the highway, though the 13-mpg city and 15-mpg combined ratings could certainly increase your familiarity with your local fuel stop. Then again, we reckon that to be less of an issue when there's an oil field with your name on the deed.

Starting at $215,000, the 2013 Continental GT Speed isn't for those of us mired in the toils of a proletariat existence, and while there are certainly quicker machines available for equivalent cash, this big Bentley manages to elegantly toe the line between comfortable grand tourer and snarling muscle-bound prize fighter in a unique way. This class of cars is all about cultivating desire, and there's plenty worth wanting in the newest capstone to the Bentley line. The only question is whether to pounce on this bruiser now or to wait for the arrival of the inevitable Super Sports variant. I've never been one much for patience, myself.