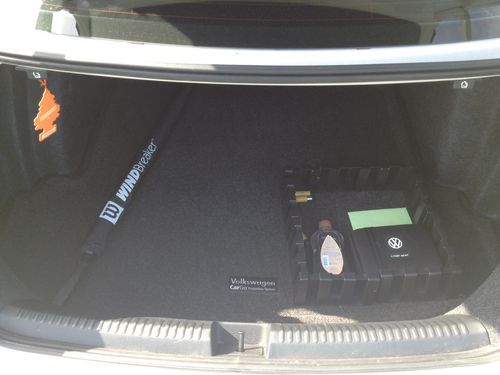 One owner 2012 Jetta TDI with Premium package.  I bought this car new from Don Jacobs in November 2011 as a commuter car to college.  All services have been performed at Don Jacobs in Lexington KY.  The car is loaded with everything except Navigation.

Automatic DSG with Tiptronic transmission
Power window
Power locks
Cruise
Black leather
Steering wheel controls
Fender touch screen stereo with 6disc changer, Sirius, iPhone compatability, blue tooth, aux input, media card, etc.
Monster mats and truck cargo mat with first aid kit
Tinted windows
The car has 47693 miles and averages 41.9 mpg on highway and 37 in the city, has a 14.7 galling tank.  The car is a blast to drive and has plenty of driver room to accommodate me at 6'4".
The car as two minor dings, one in the drivers door from a hammock blowing into it during a storm, and one on the hood from a rock on the interstate.   Other than that the car is perfect.   One picture shows hood but the door ding doesn't show up in any picture I could take.