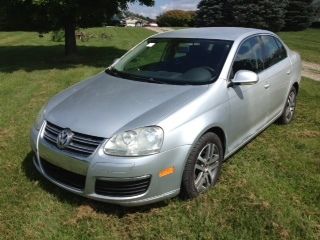 Up for auction is a 2006 VW Jetta 2.5. This vehicle runs and drives good all services and campaigns have been done. There is some damage to the front Lower grill is busted and bumper has a hole about the size of a quarter. Air-conditioning blows cold. This car has not been detailed yet but will be by the time for pick up. At the time of pick up I will gladly scan all electronic systems So you know that there will be no hidden or Electrical mechanical problems. When I bought this car I was under the impression that it was a TDI diesel which obviously it is not. It did have a bad transmission When I purchased it which I replaced with a junkyard transmission that had 68,000 miles on it. Feel free to email me with any questions that you might have on it and I will do the best to answer them I am not the original owner I purchased this car off of a buddy of mine's uncle. Good luck and happy bidding please look at my EBay record.