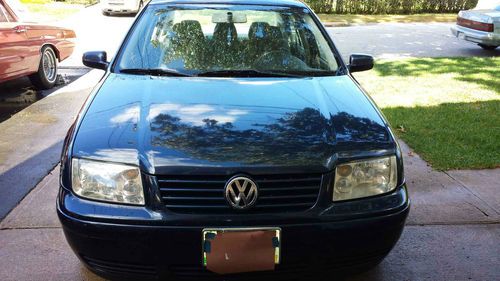 Condition: UsedA vehicle is considered used if it has been registered and issued a title. Used vehicles have had at least one previous owner. The condition of the exterior, interior and engine can vary depending on the vehicle's history. See the seller's listing for full details and description of any imperfections.Seller Notes:"Jetta is very clean with average amount of scratches on the painted surfaces. This car was never abused in any way.."

I have decided to sell my fuel saving Jetta.  The Jetta may have scratches here and there due to the year but everything on the Jetta works perfectly. AC, Rear defrost, heated seats, electric windows, keyless entry, and sunroof. There are no "check engine" lights. Jetta has 147000 on the clock.  Timing Belt and water pumps changed at 90000..Brakes and rotors replace last year. Just installed a new windshield. Oil changes always on schedule. Jetta also comes with a complete set of four studded tires on rims. Also Upper &Lower ball joints with control arms replaced 17 months ago.