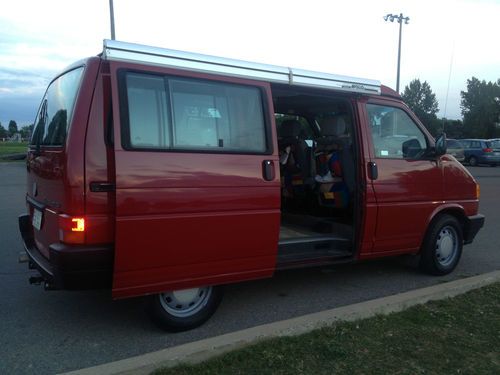 Condition: UsedSeller Notes:"Westfalia has some scratches around the body. Wear and Tear throughout the years. Some dents can be seen. The rear driver side has a small dent and scratches. Driver side accidented years ago. Putty can be barely seen."

I hate to let her go, but I am selling my westfalia. I am her 2nd owner.
She has served me very well. I have gone touring in Ontario, Quebec and the Atlantic provinces throughout the years.
Very Dependable.

I have provided her with regular maintenance.
Recently installed a new alternator, new radio with USB attachment, and new catalytic converter.
Westfalia has Electric heater and alternate battery as well.

She has very new tires. 1 year old All season  (Continental) tires AND 2 year old Winter (Michelin) tires.
Everything in the Westfalia works very well.
Air Conditioner, Stove and Sink have never failed me.
Refrigerator works in either Battery or electric mode.

The pop up canvas is perfect for 2 people sleeping up above.
Pop up Screen opening for those summer nights.
Curtains, Clips and the rear Hatch screen are original.
Original Awning extension, perfect for shade or rain cover.

Other Features include:
Both Captain Chairs swivel 180 degress.
Folding Table.
Back Bench folds into Bed.

There are countless other great features the WestFalia has.
It has some scratches around the body, but she`s still very pretty to look at.

If you have any questions, please email me.
Happy Bidding!