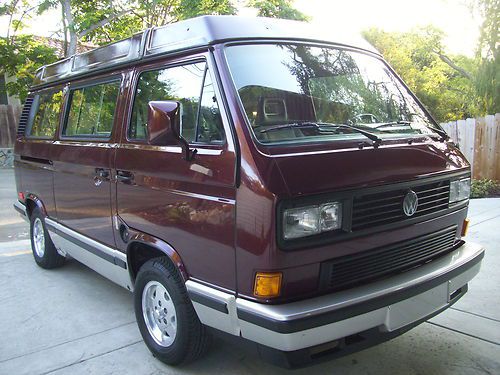 1990 Volkswagen Westfalia Very Nice Condition. This Westfalia was sold new here in the San Diego area so there is No Rust or corrosion. This is a beautiful Westfalia thats been in storeage for quite a few years and I finally got it out and ready for sale. I've had over 70 Westfalias and have restored many VW bugs, vans and more, so I do have alot of experience with Westfalias. I've camped coast to coast and from Mexico to Alaska. I really enjoy working with VWs and especially the Westfalia. If you have had a Westfalia, you know what I'm talking about, the love. Many nights I go out and just sit in my Westfalia, have a beer, relax, listen to music, and just fool around with it. This is the multivan version of the Westfalia so it does not have the stove or refrigerator. I actually prefer this version because most people find they never use the stove or refrigerator, and they are really outdated as well. In about 90% of the full campers I get, the stove, refrigerator and sink look like New. You know why they always look like new, nobody ever uses that stuff.  What you Will use is the bed, and it is much larger in this version because it extends into where the stove and frig would be. There are much better refrigerator options such as Frigfreeze and Norco that can be removed when you are not using it - which is most of the time. Check with GO-Westy, they sell a pretty cool frig too, no pun intended. Now for the stove, the first time I cooked in a Westfalia was on a fishing trip 22 years ago, never again !  it  smelled like hell for weeks from the smoke and splattered food. You want to cook outside !..  Get a little folding picnic table and a portable propane stove.  Anyway..  I just put over 300 hours and thousands of dollars into this Westfalia to make it dependable, and give it a little bit of a custom look. I just installed a new poptop canvas with the three window option, much nicer and heavier duty than the original and much better air flow. I had the top painted to match the body color because I never liked the color the factory used on the poptops, looked odd to me, almost kind of pink. I put on new Westfalia decals front and rear and that sure makes the top look nice. I also installed a new sunroof vent in the top with a new seal and a new mechanism to raise and lower the vent - sunroof.  I installed new carpet from "Sewfine Interior Products" very nice carpet. I took the covers off all the bed cushions, and took all the curtains and washed them twice, so they are very nice and clean. I've really detailed the interior as you can see in the pictures. The storeage areas are very clean, all the ashtrays cleaned, I replaced all the cupholders with new ones, rescreened the screens, threshold has been redone, restuffed the front seats, cleaned the headliner, and so much more, even the glove box looks like new inside.  Now on the outside, the paint looks very good but does have normal wear - minor scratches and door dings, but very nice for a 23 year old vehicle. Take a look at the paint, you want to know why it looks so good ? I wet sanded the entire body with 2000 grit and then buffed it with Meguiar's Mirror Glaze 95. Then I touched up all the chips and waxed it all out with Zymol, that really gives it the car show shine. All that work took over 50 hours, but how do you like the results. I painted all of the door handles and replaced the seals too. I restored the front grilles and even put a new VW emblem in. I also removed the headlights and cleaned out the lenses, see how bright and shiny they look, much better for seeing at night. I replaced the windshield rubber, painted the wiper arms and replaced all the the wiper blades. This Westfalia has a nice AM/FM CD player, and I installed a new antenna too. I've really done alot of work on this Westfalia, from buffing the paint to installing new shocks on the deck lid to putting on new tires. I also had the stock alloy wheels polished out and then painted the center wheel windows silver. I've done this to many sets of wheels and I really like the look. When I got this Westfalia years ago the motor was shot. I just installed a factory rebuilt engine from another van that had about 40,000 miles on it, and this engine does not leak A Drop of oil !  I have to say this Westfalia runs Great !.. This thing starts right up when cold and idles down in about one minute like it should. It just runs and drives great !.. It's so funny, everywhere I go people love this van, it really makes people smile. You just don't see many of these on the road anymore. These Westfalias are a good investment compared to other cars for sale. There is not another vehicle produced after 1981 that has held its value as well as a Westfalia, and these will continue to do so. Looking for a extra nice Westfalia, here you go. If you are interested in this Westfalia please don't email me, give me a call at 619 925-3174 so we can talk,  I'm sure we can work out a deal on this Westfalia. 10 emails can be reduced to 1 conversation.  Thanks,  Jim..