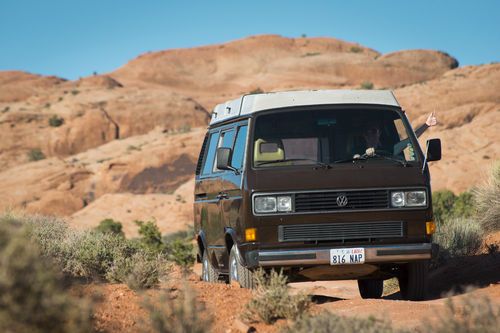 Looking for a good home for our beloved Westfalia, "Chocolate Thunder." This adventure-ready van has spent her entire life in the southwest and has provided a wealth of wonderful experiences for us. Mechanically sound and ready to hit the road. A few minor dents and scratches (see photos). Interior clean. Gas stove and sink fully functional. Fridge has never worked (except as storage). Forward cab re-carpeted several years ago. Driver's seat has one tear in the upholstery. Original engine rebuilt at 135,000 miles. Transmission rebuilt at 157,000 miles. No drips on the garage floor. Bug screens (top and rear hatch) in great shape. Only two pinhole punctures in the top canvas. Extras: custom sound system with six speakers and AUX in on receiver, Yakima roof rack, custom steel rear bumper with tow receiver & electrical hookup, center console with storage and generous cup holders, good tires (7,000 miles), factory repair manual, extra sound proofing in the doors. Maintenance records available on request.