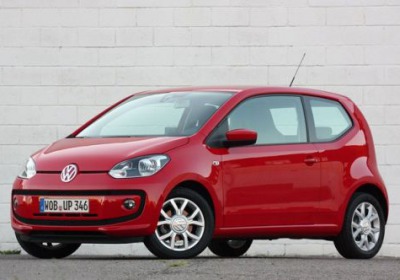 Even though we've finally gotten a look at the production version of the 261-mile per gallon Volkswagen XL1, this aero-shaped two-seater was never intended for high-volume sales. Fortunately, it sounds like the same isn't true for the car's diesel plug-in hybrid powertrain, which, according to a report from AutoCar, could make its way under the hood of another Volkswagen model: the Up! minicar (shown above).

A potential Up! Hybrid would likely be able to return some of the same impressive fuel economy numbers as the XL1, but it would be a more realistic car with more passenger space and greater production capacity. The hand-built XL1 will use a 47-horsepower, two-cylinder TDI engine paired to a seven-speed dual-clutch transmission, and the 27-hp electric motor and lithium-ion battery helps deliver an all-electric driving range of 31 miles.

One of the core pillars of the XL1's design is its lightweight construction with a 1752-pound curb weight, which makes the Up! a perfect recipient for using this powertrain since it weighs just 300 pounds more. The report says that the Up! Hybrid is still in the developmental phase, so a production version isn't expected for at least another 18 months.