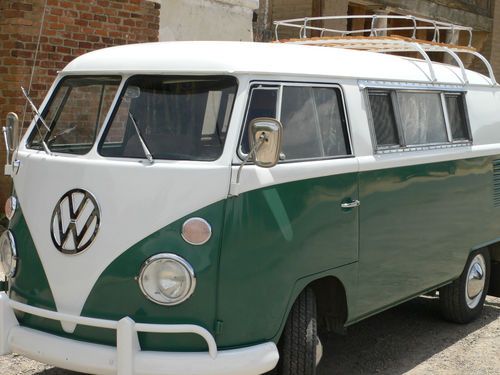 Condition: Used: A vehicle is considered used if it has been registered and issued a title. Used vehicles have had at least one previous owner. The condition of the exterior, interior and engine can vary depending on the vehicle's history. See the seller's listing for full details and description of any imperfections. ...
Back in the mid 60's, there was so much demand for the VW Camper Vans, the factory couldn't keep up. An American company, Riviera stepped in and convert base model VW buses with their version of a VW Campmobile - Hence, the Riviera Version. This is an fine example of that product and I made every effort to keep everything original This bus is in amazing condition for being 46yrs old, but there are some things with some wear and tear. E.g. seats (see picture) and there is a small rock chip on the split windshield
I bought the bus from the 2nd owner, with only 82375 miles and he told me they were original miles. I believe it. In the restoration there were many objects and items that had factory numbers on them.
Body
There were two small spots of rust: 1" in front passenger floorboard and some small spots below cargo doors. Both were repaired with welded steel. That was it for the entire bus. The only damage I am aware of was in the front, where there had been a very minor accident. I had this repaired and repainted the entire car back to original color scheme. There was also several parking lot dings. The aluminum windows were taken out at this time and re-polished.
INTERIOR
Doors and interior were paneled with DYNAMAT to reduce road noise. WHAT A DIFFERENCE. The original Riviera wood panels were re-sealed. Linoleum floors were replace with non-aspestos tiles. The sink and seat consoles can be easily removed should one want to use it as a "Van"
ENGINE
Overhauled. Pistons were upgraded to 1600cc and dual port heads, which were CC'd to exact size on both banks. Rods and Pistons matched and balanced. Ending compression was 125psi for all cylinders.
GAS TANK - Removed, refurbished, new sensor
RUNNING GEAR
Bearings were replaced in the reduction gears. Trans - nothing done as it was still tight
Many other things done, but you will have to call me.  575 534 7995
This bus is the last of the COOL split window buses and it was the first to be fitted with Factory 12V. Everything works: All running lights, night lights, interior lights, windshield wipers, horn and radio (sometimes intermittent - will have it factory rebuilt) - A GREAT CAR!
Please contact me with any questions.
Winning bidder must send $750, non refundable deposit within 1 week. Please do not bid if you have any negative feedback in your profile or less than 5 bids. If these apply, email me.