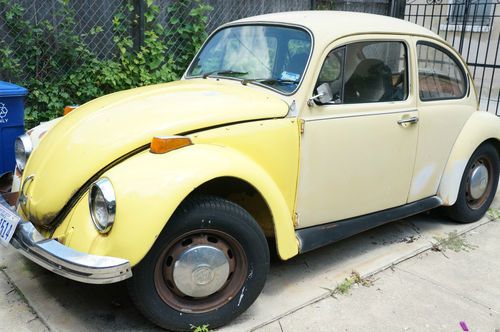 Condition: UsedA vehicle is considered used if it has been registered and issued a title. Used vehicles have had at least one previous owner. The condition of the exterior, interior and engine can vary depending on the vehicle's history. See the seller's listing for full details and description of any imperfections.Seller Notes:"back right rear tire is flat. needs replacing, a little rust, interior ok but some tearing on the back seats."

This is great car that runs well. I've had it for 10 years.

Condition:
This is a 40 year old vehicle.
The back rear tire is flat and needs to be replaced.
There is some rust.
The antenna is missing.
Basic wear and tear after 40 years.
History:
I purchased this car 10 years ago from a Homeless shelter. Made repairs and got it up and running again. It has been running great for 10 years now.
Shipping and Payment:
Deposit of US $500.00 within 24 hours of auction close. Immediate deposit required for Buy It Now. Full payment required within 7 days of auction close.
Buyer is responsible for pickup or shipping.