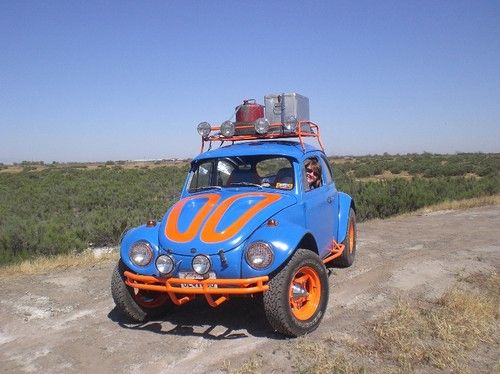 Condition: UsedA vehicle is considered used if it has been registered and issued a title. Used vehicles have had at least one previous owner. The condition of the exterior, interior and engine can vary depending on the vehicle's history. See the seller's listing for full details and description of any imperfections.Seller Notes:"engine, trans, front end, brake system, rebuilt three years ago, engine from CB Performance. I have single and dual carbs for it. floor pan under battery replaced, badly. the floors have a few years left in them but there are 1/4 inch holes in a few spots on both sides. radio is non-op. both lower door hinges have been replaced. the car was hit on front right before baja conversion, r/f quarter is lumpy but the car aligns perfectly and drives fine. sheetmetal under rear hatch is perforated. crossbars on roof rack are in poor shape. typical vw oil drips. car is Washington registered, you will have to pay tax on it to transfer out of state."

I bought this car 3 years ago as a shell in California, I built it up as a Baja to bring to Puerto Rico. It is in Puerto Rico now.  CB Performance provided the 1914 cc engine, I have a set of dual Kadrons for it but took them off looking for gas mileage. it has an alternator, digital ignition(no points to replace!) full breather, oil cooler(not mounted) Being a VW it leaks, but only a tiny amount. the tri-mil exhaust is powdercoated but that is starting to fail, probably have to get it redone if looks are important to you. I'd just leave it rusty or rattle can it with high temp paint once a year.
The swingaxle  transmission was rebuilt as well, it had never been opened and still had vw gears and bearings in it. the frontend is link pin and is converted to disk brakes with all new parts. the rear brakes were just rebuilt stock with new parts. tires are in great shape with lots of life left in them, maybe they are 15 percent worn.
The wheels and bars are powdercoated the rest is industrial enamel paint. the fiberglass is actually a vintage, I bought it from a guy in Cali that had it hanging in his barn for decades, hence no cut up fenders- they work great to keep the mud off the car and don't hit anything. lift shocks with springs for height.
The rusty lower door hinges were replaced but I skipped fixing the rear metal bits as seen in the pics. the floors are in pretty good shape and have a few more years in them, but they do have a few holes. I noticed a bubble under the rubber around the rear window- that will need attention soon.
All the electrical works fine, 12 volt converted and relays run all the high load stuff. full guages inside, the speedo is from a 77 or so, it has a light for an egr? but i just wanted a fuel guage that would work with the late model tank, no lifting the hood to fill up. electric fuel pump with kill switch, hidden ignition switch.
The interior has modern seats with covers in the front and vw original with covers  in the rear. dynamat on the firewall with covering of blue astroturf, same astroturf on the floors and ceiling. the radio is broken, I think water got it when I was fording a stream. but that doesn't matter, you can't hear a radio in this thing anyway it is so loud. aluminum door skins inside don't quite completely cover. but they are what's available without having custom ones made.
The roof rack has been bent and repaired many times, needs new cross bars but still ready for rough service, I regularly put 200 lbs of kayak on it and go out for the day. the bike rack is super cool and holds two full size cruisers. I've towed 1000 lbs with the hitch.
I cannot count how many times people have almost hit me trying to take a picture of this car. especially when I go to the beach. where I spend many weekends with it. Baja's are rare in Puerto Rico, I've only seen a handful. you are more likely to see a Delorean than another Baja beetle
This has been my only car for three years, I've put 12000 miles on it in that time. Basically it has been a great and loyal friend to me but I have to sell it. I am being re-assigned to Kansas (Military), there is no heater in this car and that means it cannot go with me, I need one car I can drive all year and I don't like freezing. It is in great shape, runs well and looks good. It even won a few local car shows in California before I brought it here. I have all the parts receipts to prove the work I've done. You get everything in the pics with the car,  gas tank, cooler, spare, bike rack, carbs, extra parts, awards, receipts, tow bar, two sets of keys and a stack of vw trends magazines.

You will be required to put a 500 dollar deposit down on the car within 24 hours via Paypal and pay for/pick up the car within one week if you are within Puerto Rico.
BUT there is a shipping option!!
I can have the car shipped for free to Kansas City MO. where you can take possession of it, either by you personally or a shipping agency to truck it wherever you are. the car needs a 500 dollar deposit within 24 hours via Paypal and must be completely paid for before it is picked up up if you choose that option. that option will take time, the car will be available after August 19th in Kansas City
I am not going to accept any form of payment other than cash or certified check. for the remainder. no paypal or personal checks for this.